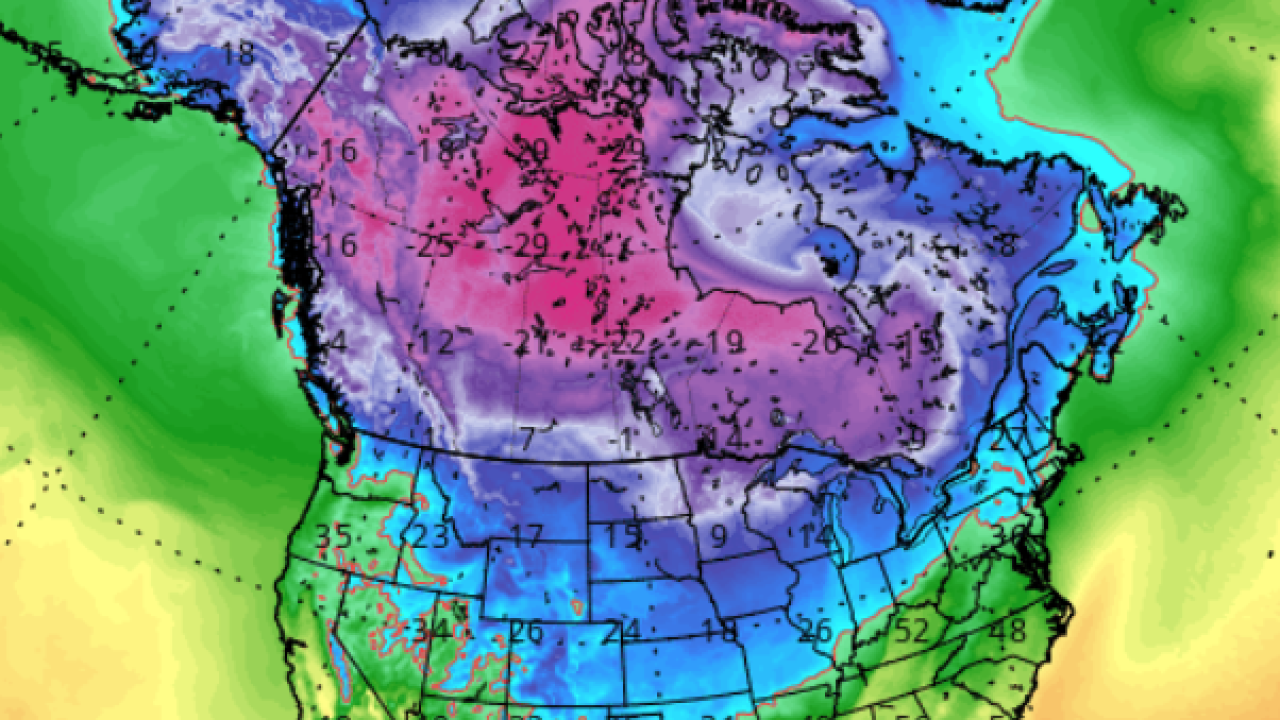 Low clouds were spreading across the state line of Missouri & Kansas as I started writing this blog. It will likely become overcast for much of the day with the sun angle so low. Winter begins at around 4 AM Monday morning. Let's discuss the Arctic Oscillation today as we see some changes in that index showing up.

Let's begin, however, with this mornings low cloud surge:

One of the new features we have at 41 Action News is this cloud sector that allows us to show the low clouds at night. This picture, taken around 7:45 AM, shows the low clouds along and just west of the state line. They were steadily moving east, and it will likely become a thick low overcast for at least a few hours as these shift east.

Where is the snow? Well, look at Clinton, MO last night as our 10 PM newscast on 41 Action News was on. I didn't see this tweet until this morning, but it was snowing just a few counties to the south last night. Brian Dehn tweeted this picture to me last night. Thank you Brian:

I looked outside at least a dozen times yesterday in search of even one snowflake. Well, Clinton made up for us last night, as there were billions of snowflakes and they accumulated. Wow! Our next chance may arrive early Saturday morning. There is a small system that some of the models have some snow in our area early Saturday morning, but as has been the case, this chance is low at the moment.

The AO has dipped to almost -3, and it is forecast ti stay in the negative for the next ten days or so. When the Arctic Oscillation goes deeper into the negative territory, blocking is more likely over far northern regions such as Alaska and Greenland. If this blocking does indeed form, then there is much increased chance of an Arctic blast, and the jet stream gets forced farther south and energizes. This would lead us in to a rather wintry stretch. We need to see if this blocking develops first. Arctic air is building up, and here is a forecast temperature map valid near the end of the year:

The purple to pink colors up there show way below zero degree air, in fact down to nearly 40 degrees below zero. As this air mass grows, it almost has to be released and shift south in to the USA. But, when? We are monitoring the pattern closely and we still have some analysis to be done. Right now, we just know conditions are becoming favorable for this huge Arctic air mass to form.

For now, we have these low clouds to deal with today, and then we will look into that possible early Saturday storm system, that most likely will once again miss us to the north and east. It likely will pass by dry in our area, as has been happening. Have a great day and watch 41 Action News for your in-depth and most accurate forecast.

While we likely miss another storm this weekend, the east coast is not going to miss this:

Can you imagine this? My Aunt Margy lives in NYC, and my brother Blake lives just outside of NYC across the River. I will be calling them to see how they experience this winter storm.

Thank you for spending a few minutes of your day reading the Action Weather Blog. Have a great Wednesday.