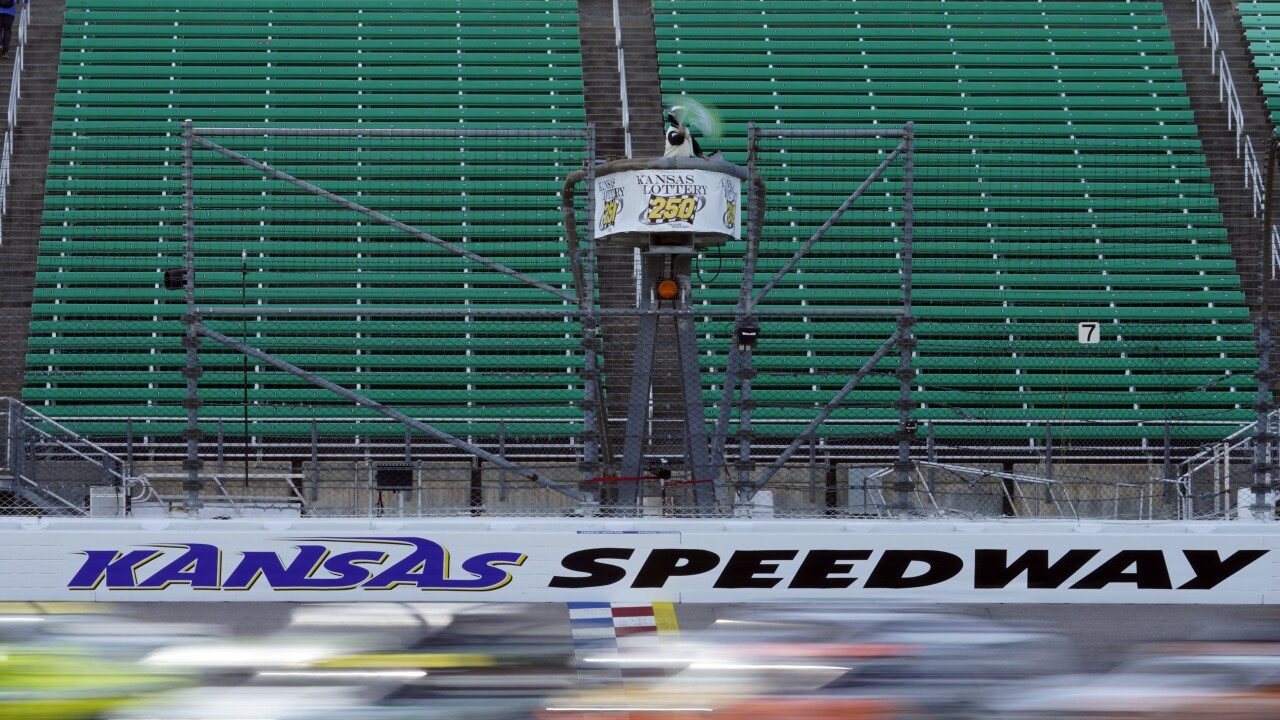 (Copyright 2020 The Associated Press. All rights reserved. This material may not be published, broadcast, rewritten or redistributed.)
Charlie Riedel/AP
Drivers pass under the green flag during a restart at a NASCAR Xfinity Series auto race at Kansas Speedway in Kansas City, Kan., Saturday, July 25, 2020.

KANSAS CITY, Mo. — A limited number of fans will be allowed to attend the Hollywood Casino 400 next month at Kansas Speedway in Kansas City, Kansas.

That’s when the NASCAR Cup Series returns to the 1.5-mile tri-oval for a playoff race, the first of three in the Round of 8.

It’s unclear how many fans “a limited number” will be. NASCAR and Kansas Speedway only announced Wednesday that the number would be “in accordance with enhanced safety protocols and procedures to provide a safe experience.”

Tickets that already have been sold to the race will be honored, but there may be some changes to seat assignments.

“To ensure social distancing between groups, fans who have already purchased tickets to the Hollywood Casino 400 may be reseated to new locations, as comparable as possible to original seats, with new, lower ticket pricing applied,” Kansas Speedway said in a statement.

Fans will be screened for COVID-19 symptoms before entering Kansas Speedway for the race and social distancing rules will be enforced. Re-entry won’t be permitted.

All guests over the age of 3 years old will be required to wear masks.

Tailgating outside the track won’t be allowed and coolers won’t be permitted inside, though clear plastic bags no larger than 18 by 18 by 14 inches in size will be allowed, and re-entry won’t be allowed.

“At Kansas Speedway, we have a tradition of fantastic Playoff racing, and what better treat for our fans than to have them witness that in person,” Kansas Speedway President Pat Warren said in a statement. “I know the drivers feed off the excitement of having the fans on hand, and we are enthusiastic for the opportunity to welcome them back to the track, offering a safe, healthy environment for everyone.”

Sporting Kansas City — whose home stadium, Children’s Mercy Park, is located across the street from Kansas Speedway — allowed 2,300 fans to attend its first home game since the COVID-19 pandemic halted the season in March.

The allowed capacity for games has since been bumped up from 14% to 18%, or roughly 3,300 fans, for remaining home games.

Based on the 18% figure, around 8,640 fans would be allowed in the grandstand, where seating capacity at Kansas Speedway was reduced to 48,000 before the 2019 season.

It’s unclear if that would include any fans allowed to camp at the track’s campgrounds, which also will have a reduced capacity for race weekend.

Fans would not be granted infield access for the race, which would be restricted to essential industry personnel.

The winner of the Hollywood Casino 400 receives an automatic berth in the Championship 4 on Nov. 8 at Phoenix Raceway.

The Chiefs — which are subject to oversight from the Kansas City, Missouri, Health Department — are allowing 22% of capacity, or approximately 17,000 fans, for games at Arrowhead Stadium.

There are four races scheduled at the track Oct. 16-18, starting with the NASCAR Gander RV and Outdoors Truck Series Kansas 200 at 6 p.m. and the ARCA Menards Series Kansas 150 on Friday, Oct. 16.

The Truck and Xfinity series races also are the first of three in the Round of 8 for the playoffs, while the ARCA Menards Series race is the season finale.