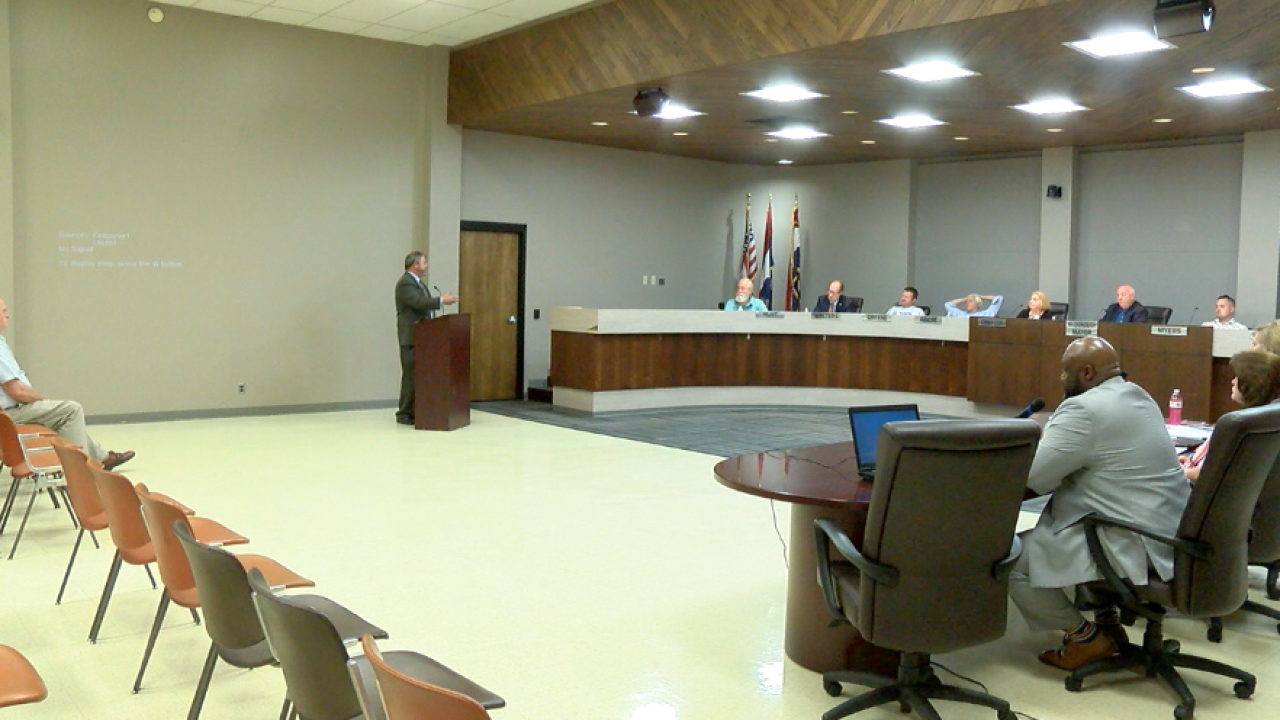 Staff from the state auditor&#39;s office explained the audit process to the Raytown Board of Aldermen on Tuesday night.

RAYTOWN, Mo. — Auditor Nicole Galloway released results on Thursday of a citizen-requested audit of the city of Raytown.

The report comes more than two years after the process of gathering more than 1,600 petition signatures began.

Galloway's audit gave the city an overall rating of "Fair" and found a need for increased transparency measures and better monitoring of funds used to pay down incentive debt. It also raised concerns about severance agreements made with police department employees in 2017.

According to Galloway's report, the city made several payments totaling more than $70,000 to nine police department employees during the fiscal year that ended October 31, 2017. The report describes the payments as "not necessary and reasonable."

The audit report says that in February 2017, former Raytown Police Chief Jim Lynch approved a severance agreement with a former captain that included a lump sum payment of $44,806, which was equivalent to 26 weeks of pay. The captain was also paid for 26 weeks of healthcare, totaling nearly $10,000. This agreement was not approved by the board of aldermen, but city personnel said it was discussed with legal counsel and the then-city administrator. Staff had been advised the chief could negotiate and enter into the agreement without board approval.

The other severance payments the auditor mentioned came in October 2017.

That September, as 41 Action News previously reported, it was announced $2.7 million would be cut from the proposed police budget.

In October eight employees were offered severance packages totaling about $25,000.

But four of those same employees were rehired by Dec. 1, 2017 due to the unexpected resignations of 17 police officers. A fear for job security and concerns about the budget cuts were cited at the time as reasons for the departures.

In addition, Galloway's audit found the department did not follow or properly document screening procedures for citizens applying to work in its volunteer corps.

The audit also found the city did not always comply with the Sunshine Law, as the board of alderman and the park board did not maintain minutes for all closed meetings and did not limit topics discussed during them.

The other main point discussed in the audit report is the city's monitoring of funds used to pay down tax increment financing (TIF) debt for the Raytown Live Redevelopment Area.

Back in 2007 the city issued $40 million in TIF bonds to finance the project, which includes a Walmart store.

According to the audit report, the city has contributed restricted sales taxes, including ones for capital improvements, transportation and stormwater, to pay down the debt. However, the city has not tracked the actual outstanding debt, which Galloway said makes it impossible to ensure the restricted funds are being used appropriately.

The state auditor called on the city to calculate the remaining portion of the TIF debt being paid with restricted sales taxes and to better track those payments to ensure they're in compliance.

"Citizens requested this audit for a thorough and independent review of their city government. We found several areas in which improvements can be made to increase transparency and ensure the city is managed effectively," Galloway said, "I appreciate city officials' commitment to make positive change in response to our recommendations."

In responses throughout the report, city staff said fixes are in progress or have already been made.

Some of the steps taken include adopting measures to monitor the use of restricted sales tax dollars, revising police department policies regarding volunteer groups, and having the city clerk attend closed sessions to take minutes in compliance with the Sunshine Law.

"During the past nineteen plus months, we have worked in direct collaboration with the Auditor's staff, operating efficiently, effectively and transparently on behalf of the Raytown taxpaying businesses and citizens. We have and will continue to use the information provided from the Auditor's Report to improve our operations," City Administrator Damon Hodges said Thursday.

"We will move forward from this with confidence in the City's collaborative and transparent leadership, a commitment to a process of continuous improvement and with faith in the current plans that are already underway, as well as any plans for the future," Mayor Michael McDonough added.

The audit was initially estimated to cost taxpayers between $75,000 and $100,000. A final invoice has not yet been provided.

In a press release, city officials said the large number of hours expended by staff on the audit will bring a return on investment that will "assist in addressing concerned levied by the Raytown citizens that signed the petition as well as all of the citizens of Raytown."

Tony Jacob, who led the effort to gather signatures for the petition, believes it was worth the price tag as it will improve the city's operations moving forward.

"The city has agreed to implement a lot of corrective action, and they've instituted some already," Jacob said, "My hope is that they'll continue with their promise to complete the actions they've said they would and that they won't in the future go back to some of these poor practices."

Although the audit is complete, the State Auditor's Office is now reviewing whistleblower allegations related to potential bonus payments for city employees during the current year.