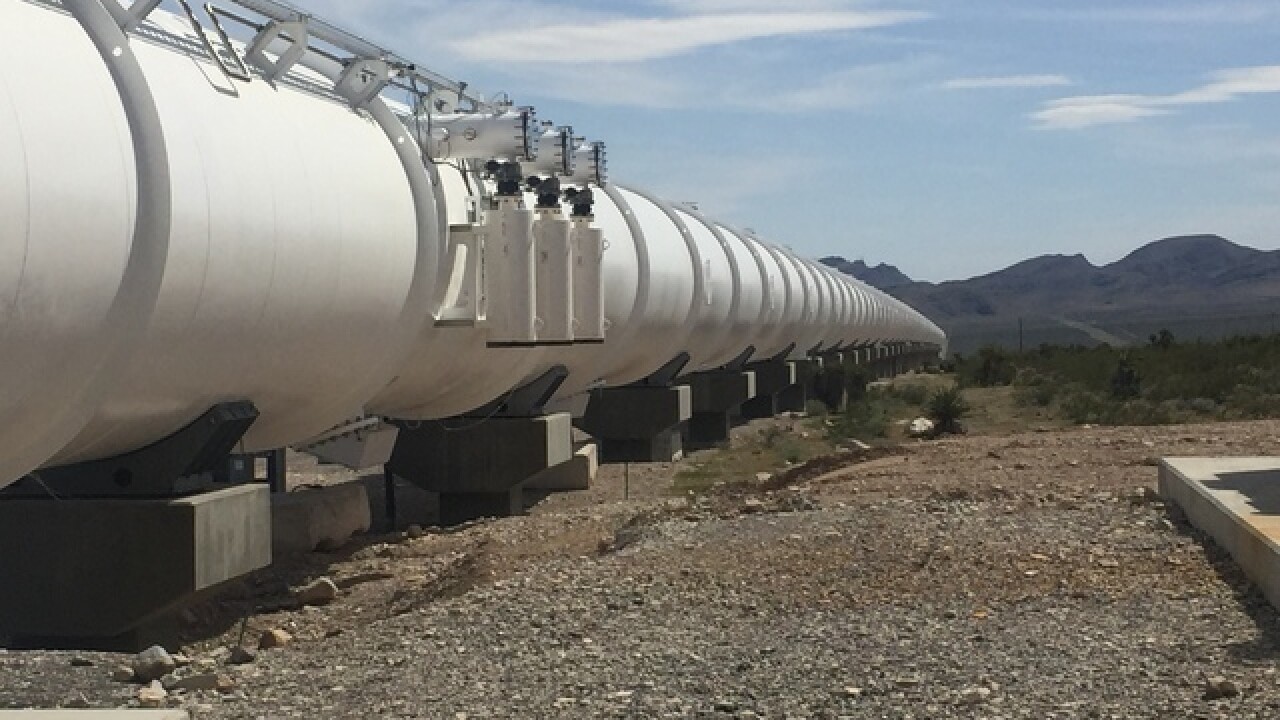 Copyright 2018 Scripps Media, Inc. All rights reserved. This material may not be published, broadcast, rewritten, or redistributed.
Hyperloop has built a test tube on a remote part of land outside of Las Vegas.

KANSAS CITY, Mo. — Plans to bring a hyperloop to Missouri, connecting Kansas City and St. Louis in under 30 minutes, appear to have veered off course.

Virgin Hyperloop announced Thursday that it will build its Hyperloop Certification Center, including a 6-mile testing track, in West Virginia instead. The company called it a step toward "making hyperloop travel a reality for people everywhere."

Missouri had been in the running for the certification site, with a feasibility study in 2018 finding a route along Interstate 70 between Kansas City and St. Louis, with a stop in Columbia, to be a viable option.

In its news release, Virgin Hyperloop said it hopes the test track in West Virginia will be only the first as it looks to reinvent transportation in the U.S.

"Hyperloop is that solution, and we look forward to working with our partners across the country — in places like West Virginia, Ohio, Texas, Missouri, Washington, and North Carolina — to connect the country from coast to coast," Jay Walder, CEO of Virgin Hyperloop, said in the release.

Ryan Kelly, the company's vice president of marketing and communications, said in an interview with 41 Action News that while he acknowledged the disappointment felt in Missouri, the testing site in West Virginia will be a "complete positive for hyperloop in America and American innovation."

Kelly also said that while the test track will be built in West Virginia, it does not mean the company will build the first full commercial route there, calling that project "still up for grabs."

Estimates have shown that a commercial route in Missouri could bring an estimated economic impact between $1.67 billion to $3.68 billion annually and create as many as 17,000 new jobs.

41 Action News anchor Lindsay Shively visited Virgin Hyperloop's test site near Las Vegas in spring 2018, where a company leader demonstrated how an electromagnetically propelled pod, designed to fit nine to 12 people, would travel through a vacuum tube, reaching top speeds of 700 mph without creating the kind of turbulence experienced on an airplane.

Virgin Hyperloop said it aims to achieve safety certification by 2025, with commercial operations beginning in 2030.

The certification center in West Virginia is expected to create thousands of temporary construction jobs there and up to 200 full-time jobs when completed. Construction is planned to begin in 2021.

Nearly a dozen other states, including Missouri, had submitted bids for the project.