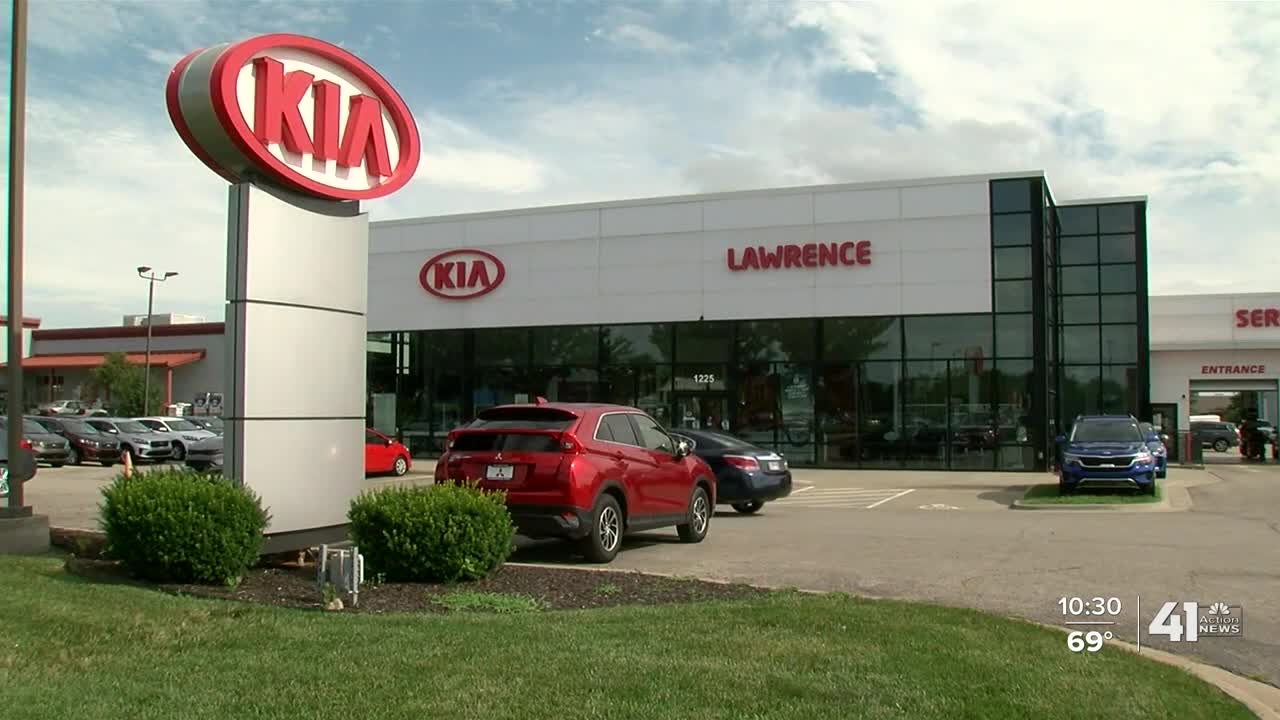 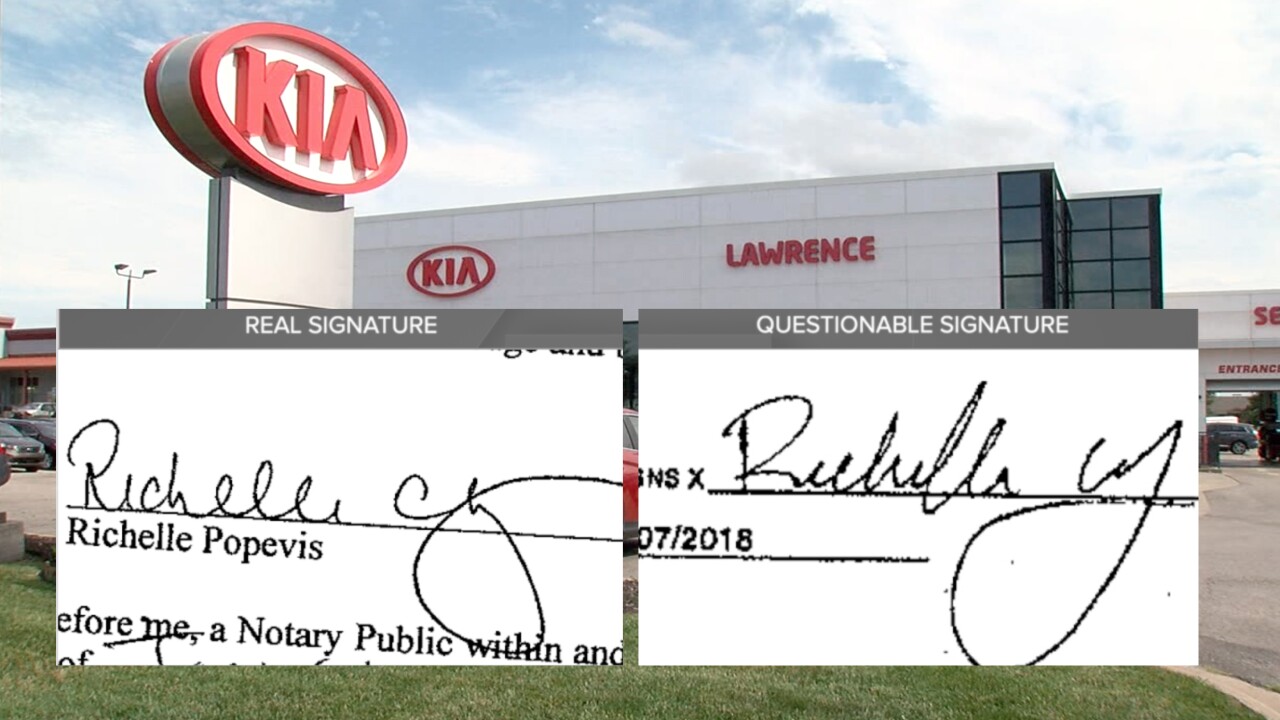 Popevis kept a copy of the original contract.

The I-Team obtained a modified version of her contract submitted to her lender.

“That’s not my signature,” Popevis said when she looked at the modified contract.

She said none of the signatures on the modified contract, and even initials, were her handwriting.

"To be quite honest, me and my son laughed at how obviously wrong they are," Popevis said.

Popevis provided the I-Team with her original contract for the Xterra, an unrelated court document with her signature and a document from her former employer with multiple signatures on it for comparison to the ones she said are fakes.

We provided copies of those original documents to handwriting expert Lynda Hartwick for analysis.

Hartwick compared Popevis' known signatures to the ones in question.

“It is more likely than not — it’s highly probable — that is not her signature,” Hartwick said about the questioned signatures.

Hartwick, a retired St. Louis County detective, is frequently hired as a handwriting expert through her company Documents in Dispute.

She has testified in both state and federal court for nearly 30 years.

Hartwick said there are about 23 different tests she does on signatures.

She said some qualities which make a signature unique include the speed of the writing, where the letter starts to form, how smooth it is, how letters link to each other, the height of the letters and how those letters touch the baseline.

Hartwick said among the differences between the known signatures and signatures Popevis said are fakes are the way the capital “R” is made in Richelle and the overall difference in smoothness.

"Those are not written by the same person as the person who wrote the known documents," Hartwick said. "This was definitely a simulated signature. Someone apparently did have the signature of Richelle and attempted to mimic her writing."

Hartwick stopped just short of giving what she called a “conclusive opinion” because all the documents the I-Team provided her are machine copy and not originals.

As a result, Hartwick couldn’t tell where the pen was lifted and put back on the paper.

“If I had the original documents, I feel comfortable I could have given a conclusive opinion that Richelle did not write the documents in question,” Hartwick said.

He said Part-Owner/Sales Manager Kevin Morrissy told him to bring Popevis back to the dealership a second time to re-sign paperwork.

When Kavanaugh couldn’t reach Popevis, he went back to Morrissy, who told him Popevis came in and signed the documents.

When she later called, Kavanaugh thanked her for coming back to re-sign her deal, but Popevis told Kavanaugh she never came back in.

“I was very surprised,” Kavanaugh said.

Kavanaugh said when he asked Morrissy what happened, Morrissy told him he’d taken care of it.

Kavanaugh then said he went to Lawrence Kia Owner/General Manager Chin Rajapaksha, who told Kavanaugh to pull the deal’s paperwork.

"Chin had told me that someone else had signed the contract,” Kavanaugh said.

When the I-Team asked Kavanaugh if Rajapaksha specifically told him someone other than Popevis had signed her contract, Kavanaugh replied, “Yes, he was very dismissive of it. He said just kind of the cost of doing business."

Based on paperwork Popevis provided the I-Team, the cost of her loan was reduced from the deal she signed.

The deal Popevis said she did not sign removed $1,452 for an extended warranty.

In addition to having her warranty removed without her approval, the I-Team found another difference between the contract Popevis said she signed and the one she said she did not sign.

She agreed to buy gap insurance, which covers the difference between what a buyer owes on the car and what it’s worth if the vehicle is totaled.

In her original contract, it said her gap insurance was for 84 months.

In the modified contract she claims she didn’t sign, it was reduced to 78 months.

"Forgery is forgery. You know that when you're doing it, that you're committing a crime," Popevis said.

“A forensic document examiner would never use the word forgery because it requires elements of a crime,” Hartwick said. "I will say that the person who wrote the known writing did not write the questioned writing. But in laymen's terms, yes, it's a forgery."

After the I-Team showed Popevis her modified car loan contract, she also contacted her lender to get a copy of her loan application.

Within a few months, Popevis had to leave her part-time job due to a rare and worsening pain disability, dropping her income to less than $2,000 a month.

Paying for medicine and raising a teenage boy, Popevis said she was so strapped, she was paying her utilities with her credit card.

"I don't see how I would've been approved for a car loan that high when only receiving that limited amount of money," Popevis said. "They took advantage of me. They knew, I fully let them know, that I was disabled and that I was on a lot of medications."

The day after the I-Team contacted Lawrence Kia’s attorney to get comment on Popevis’ forgery claims, Popevis said Rajapaksha called her offering to make the deal right.

It prompted an email exchange between Popevis and Rajapaksha.

On July 16, Popevis wrote, “Someone in your dealership forged my signature on the contract to purchase my vehicle. Multiple times.”

She also wrote, “Someone inflated my income when it was submitted to obtain my car loan.”

And Popevis added, “Each of these occurrences is a felony in all fifty states and is punishable by a range of penalties including jail or prison time, significant fines, probation and restitution.”

She asked Rajapaksha to pay off the $17,145.09 she still owes on her vehicle and reimbursement of the money she paid from the date the “forgeries occurred," which totaled $8,709.84.

It said in part, “Your demand is respectfully, but necessarily, declined.”

Rajapaksha wrote, “We will be glad to submit this matter to arbitration so that the problem can be fully and finally resolved.”

Nobody representing Lawrence Kia responded to the I-Team's request for comment on Popevis' forgery claims.