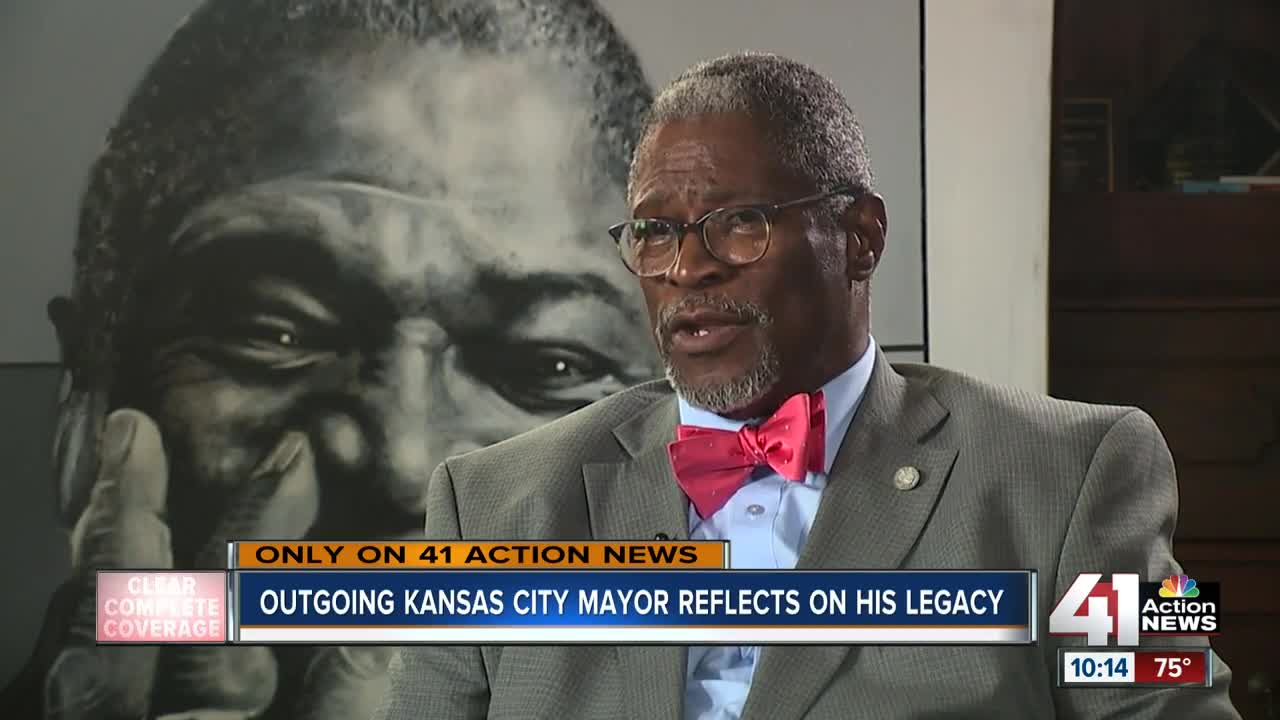 As Kansas City Mayor Sly James prepares to leave office on July 31, he reflects on what he considers to be his biggest accomplishments — as well as the failures that still "sting." 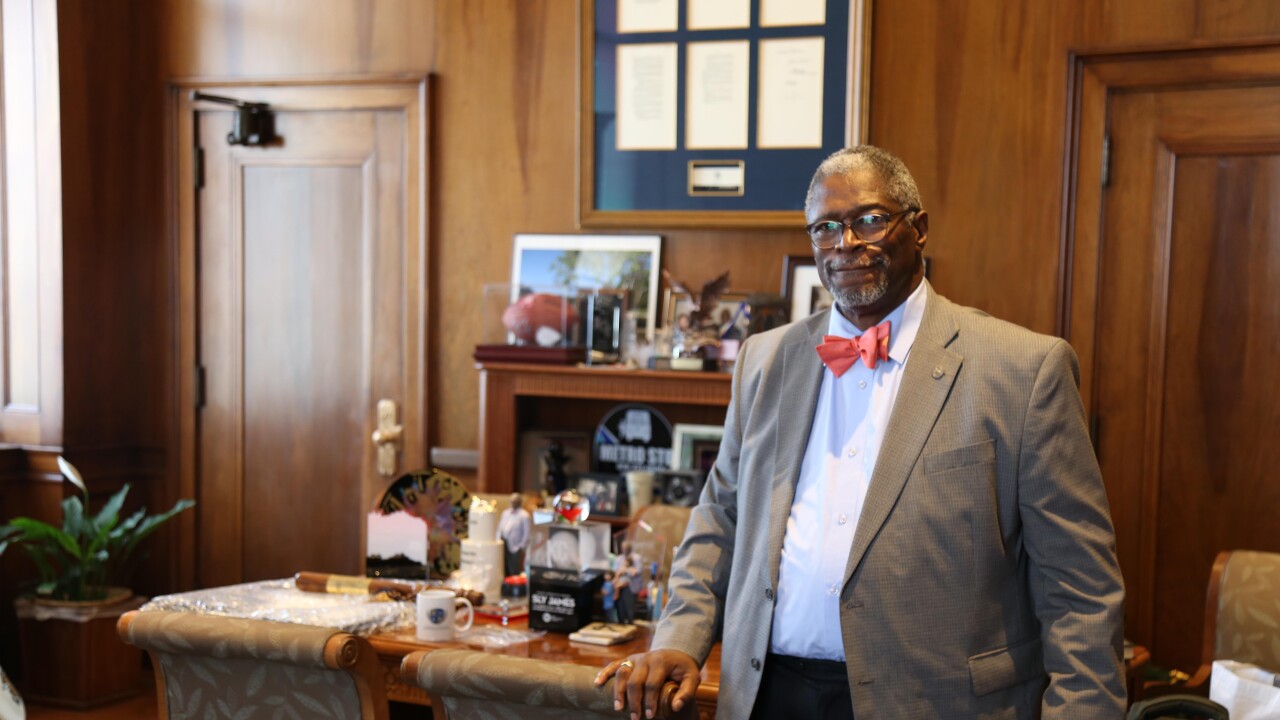 Sly James has just days left in his final term as Kansas City mayor — but looking around his office, you may not realize it.

The outgoing mayor, whose last day will be July 31, says he’s already cleaned out much of his office on the 29th floor of City Hall, but it’s still brimming with seemingly hundreds of souvenirs, keepsakes and gifts from people he’s met during his tenure.

These days, though, he has time for packing, because his city duties and responsibilities are winding down. Gone are the 14-hour days of working from sunup to well past sundown. Gone are the days — at least he hopes — of constituents stopping him while he’s running errands to discuss one issue or another. James wants to drive again, and he doesn’t want to tell anyone where he’s going.

He even has an app on his phone counting down the days, hours and minutes he has left in office.

I asked him what he plans to do on his first day as the "former" mayor and where he wants to go.

“I’m going to find a place where it says don’t park and park there and see what happens,” he joked.

The mayor likes a good joke and cracked a few of them while we chatted about his future, some of them more believable than others (no, he doesn’t have a contract to be a swimsuit model). When I pressed him further about what he will do come August, he demurred, but did say that he will continue working with his Chief of Staff Joni Wickham, collaborating with foundations and programs about which they are passionate. A different source tells me they will be consultants.

As his time in office winds down, it feels natural to reflect on the initiatives he worked hard to get passed but ultimately could not. He says that according to Wickham, there were 18 elections and referendums during his time in office, and he will end his time as mayor at 16-and-2.

“I don’t think I remember all 18, but I sure remember the two,” he says. “The first one being the failure to get the (KC) Streetcar extended on an east-west axis on Linwood (Boulevard) and Independence (Avenue). I thought that was a huge miss. That’s the kind of the thing I thought could have had some transformative impacts in crossing racial and socioeconomic lines as opposed to north-south where we get the same demographic slice going north and south.”

James says he believes the east-west expansion would have had a better chance of passing had the city waited until after the main streetcar line was built and proven its success. He says his gut told him it was too early to push for that expansion, but there were changes coming at the federal level and he hadn’t yet fully learned that trusting his instincts would be so important.

The other main goal that he couldn’t accomplish in office, he says, was his pre-K proposal. The plan, which voters overwhelmingly rejected in April, would have enacted a new sales tax for 10 years to generate funding for free pre-K programs, particularly in underserved areas.

"And that we know that we have hundreds of kids – thousands of kids – in this city every year who go without the basic educational things that they need and wind up in the poverty/crime category and we’re not doing enough to stop it bothers the hell out of me."

While those two failures still weigh heavily on the mayor, he also believes strongly in the successes he’s had during his time in office. These are the ones that he can rattle off quickly:

- The opening of the KC Streetcar (voters later approved an extension of the route).
- Turn the Page KC, the mayor’s nonprofit organization created to improve third-grade reading proficiency in Kansas City. Since the project started, reading proficiency is up nearly 20 percent.
- The city-owned grocery store at 31st Street and Prospect Avenue, an area formerly considered to be one of the city’s food deserts.
- Infrastructure changes made on Troost Avenue south of the Kansas City Health Department.
- Beacon Hill, where James played a role in getting the city’s property out of a 25-year receivership to finish the area and build housing when the city had access to low-income housing tax credits.
- Infrastructure improvements on the city's east side, which he estimates cost at least $2 billion and included improvements to pipes, as well as new streets and sidewalks.
- The new convention center hotel, a project in which the city invested millions of dollars.

He also considers the voter-approved decision to build a new single terminal at Kansas City International Airport to be among his list of accomplishments, though that project has not come without its share of controversy and disagreement.

“Seven-year problem. Pain in the rear. Really pain in the rear,” James says. “But absolutely essential to the growth of the city.”

While reflecting on his accomplishments, the conversation leads to an obvious question: Could he have done more with more time?

“I think term limits don’t necessarily serve the purpose for which people thought they would. I think term limits are the lazy American’s way of changing administrations,” James says. “It’s easier to watch someone get termed out than it is to actually have a reason to vote ‘yes' or ‘no.’ They’re gone automatically. You don’t have to think about it. You just have to think about the next person.”

James has not always seen eye-to-eye with the next person who will hold the office, Mayor-elect Quinton Lucas, who will sworn in on Aug. 1. James endorsed Lucas’ opponent, Councilwoman Jolie Justus, in the mayoral race, and James acknowledges that he and Lucas have had their disagreements in the past.

“But those disagreements don’t mean anything at this point. What means something at this point is he’s the mayor-elect of my city,” James says emphatically. “And I’m going to do everything I can to support him and this city. Period. End of story.”

The two have spent time together recently at a few of the same meetings and have discussed the transition of power. They have plans to talk more in the coming days.

“I will be an asset if he needs me. And I will be quiet if that’s the necessary thing to do,” he says. “It ain’t about him. It ain’t about me. It’s about this city, and if either one of us isn’t doing things in the best interest of the city, then shame on us.”

James says perhaps the biggest surprise in his role as mayor was how loud citizens could be. He created a term for people who he says despise any sort of change: CAVE, or Citizens Against Virtually Everything.

“If you have it in your mind that you just don’t want to do something, you can invent 50,000 reasons why you don’t want to do it or you shouldn’t do it. It doesn’t mean that any of them make a damn bit of sense,” he says. “But when you know that somethings needs to be done, you’ve got two choices. You can work around the tough parts and figure out a way to get it done. Or, you can come up with some excuses as to why it’s not necessary and let it lay there and not put any skin in the game.”

He wants the people of Kansas City to remember what it felt like before, when the city was considered behind other metropolitan areas in terms of development, transportation and entertainment.

“Nobody liked Kansas City, and we were always comparing ourselves to other places, wishing we could be St. Louis – always feeling inferior,” he says. “And now, after having those feelings, now we’re recognizing that we’re pretty damn nice. And we’re wearing KC on everything. We’ve got a little giddy-up in our step. We’ve won some ball games. We’re on the map. They’re putting us on TV on the soccer games. We’ve got a streetcar that other cities come to see about. We’re building stuff. We’ve got a new airport terminal coming in. We’re addressing situations on the east side. We’re trying to work with kids and all of that. Which of those two feelings is better?”

"When you know that somethings needs to be done, you’ve got two choices. You can work around the tough parts and figure out a way to get it done. Or, you can come up with some excuses as to why it’s not necessary and let it lay there and not put any skin in the game."

It’s clear he wants people to be proud of the city where he grew up, worked, raised his family, served as mayor and will now reside as a citizen — pushing his own City Council representative on issues about which he is passionate.

Overall, as he prepares to pack up his final belongings and leave office, he feels good about the position of the city and hopes to see the momentum continue.

“We’re pretty great. And we should never let that feeling be supplanted by the one that said we were inferior, because we’re not,” he says.