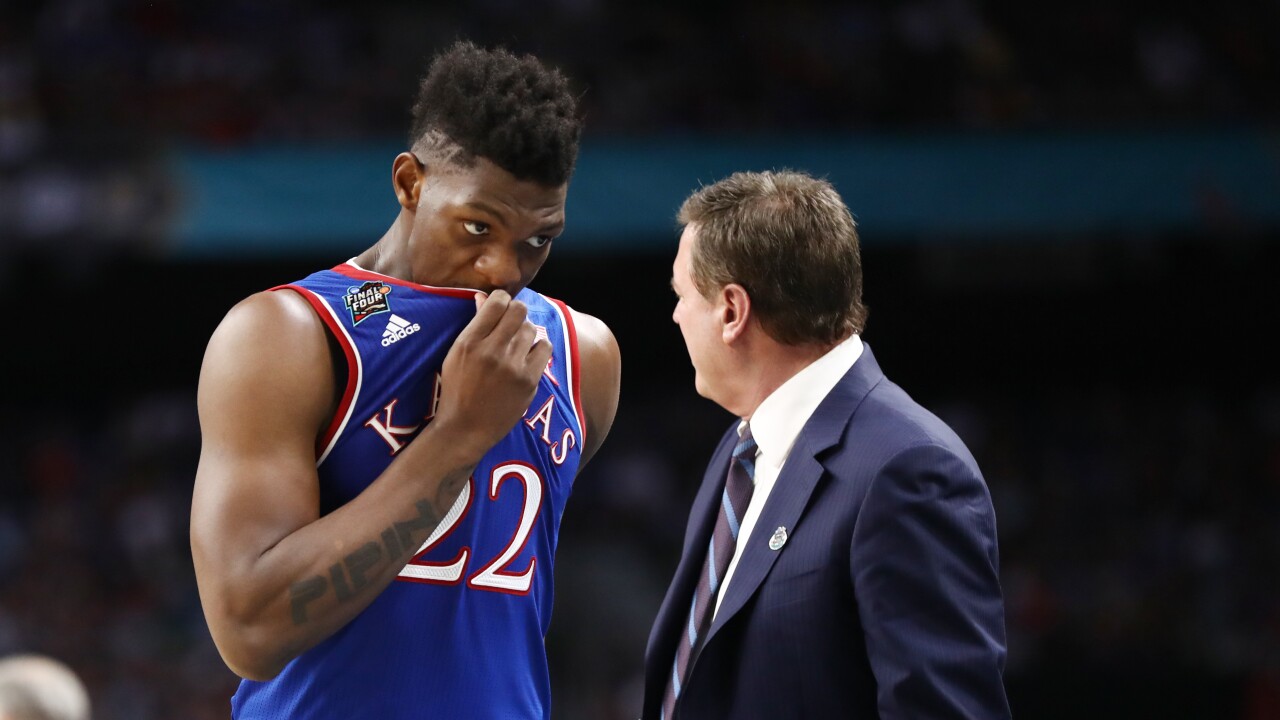 KANSAS CITY, Mo. — Less than two weeks after the University of Kansas basketball program announced that Silvio De Sousa was leaving the program to “focus on matters in his personal life,” the former Jayhawks forward has been charged with aggravated battery.

The incident occurred in the 1100 block of Massachusetts Street, which is the location of a popular bar district in Lawrence, according to the Lawrence Journal-World.

De Sousa is due in court Dec. 17, according to a summons that was issued after the charges were filed Monday afternoon in Douglas County District Court.

Aggravated battery is a felony in Kansas, but there is no record that De Sousa was arrested or booked Jan. 1 for any such offense, according to online Douglas County Sheriff’s Office booking records.

However, KU coach Bill Self acknowledged Wednesday that he was aware of the pending charges against De Sousa, which were the predominant factor in his decision to opt out of the 2020-21 college basketball season.

“Earlier this fall, Silvio told me that he had been contacted by local authorities regarding his alleged involvement in an incident on New Year’s Eve,” Self said in a statement to 41 Action News. “He was not aware of the details from that incident until a couple weeks ago, which he then shared with me. These allegations were surprising to Silvio, as they were to us. Once we discussed the details, he decided it was in his best interest to opt out and focus on this matter. We mutually agreed that was the best course of action.”

De Sousa is originally from Angola but played at prep basketball IMG Academy in Florida before joining KU.

The 6-foot-9 senior forward was expected to be a central frontcourt figure for the Jayhawks in 2020-21 despite a career marked by controversy.

De Sousa helped Kansas reach the Final Four as a freshman during the 2017-18 season, but he was suspended to start his sophomore season amid eligibility questions.

The NCAA suspended De Sousa for two years over payments made by an Adidas representative to his guardian during the recruiting process, but the suspension was cut in half on appeal.

After declaring for the NBA Draft as a safeguard, De Sousa returned to the Jayhawks for the 2019-20 season only to be involved in one of the ugliest on-court incidents in program history.

During a late January game against Kansas State at Allen Fieldhouse, De Sousa committed a hard foul in the closing seconds of a blowout, touching off a benches-clearing brawl.

De Sousa picked up a stool over his head during the ensuing melee, which resulted in his suspension for the rest of the season before the COVID-19 pandemic canceled the Big 12 and NCAA men’s basketball tournaments.