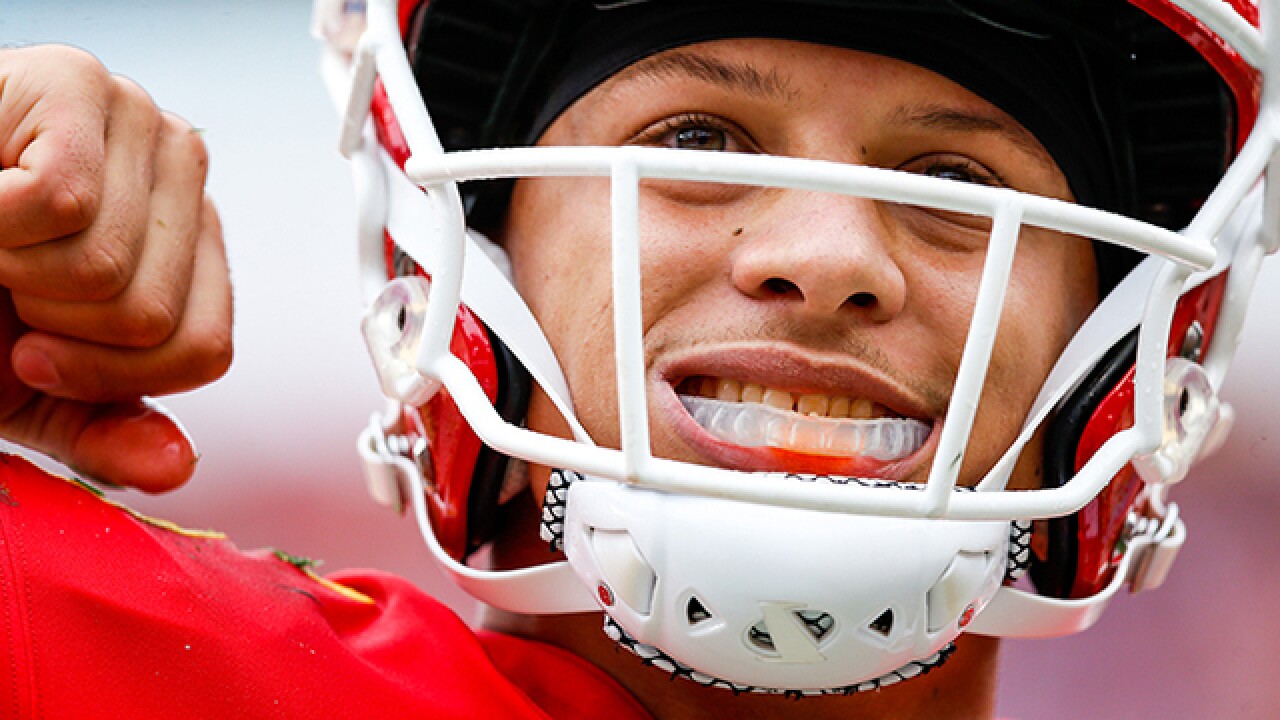 Copyright 2018 Scripps Media, Inc. All rights reserved. This material may not be published, broadcast, rewritten, or redistributed.
David Eulitt
<p>Kansas City Chiefs quarterback Patrick Mahomes flexed his right arm after scoring a rushing touchdown during the first quarter of a 30-14 victory Sunday against the Jacksonville Jaguars at Arrowhead Stadium.</p>

KANSAS CITY, Mo. — There are only a handful of guys in the Kansas City Chiefs’ locker room who are younger than quarterback Patrick Mahomes.

But there are even fewer people who command more attention and respect in that room, a fact that became apparent last weekend in the wake of the Chiefs’ decision to release Kareem Hunt.

It was late Friday evening before the club officially announced Hunt’s fate, so team officials weren’t able to address the locker room until the next morning.

During the Chiefs’ regular Saturday morning meeting, coach Andy Reid talked about the decision then Mahomes addressed the team with a simple and succinct message, according to center Mitch Morse.

“We had everyone else’s opinions brought on us — we had family and everything — but the only opinions that matter were the opinions in this locker room and opinions there,” Morse said, paraphrasing Mahomes.

The QB’s goal was to ensure Hunt’s situation wouldn’t become a distraction ahead of last Sunday’s game at Oakland — a 40-33 victory for the Chiefs — and reminded the players about the ultimate mission.

“We just kind of nipped it in the bud,” Morse said. “Listen, it’s a very unfortunate situation, but we kind of brought it back to the fact that this is about still achieving the ultimate goal, which is the Super Bowl. If that’s the case, then we have to learn from this, go on, understand that … all eyes are going to be on us. But that shouldn’t change anything in how we go about our business.”

Nothing more needed to be said.

Mahomes may only be in his first season as a starter, but his rapid emergence as one of the NFL’s brightest stars — he’s among the favorites to win MVP this season — give him massive credibility even among veterans.

“Not only is he an exceptional football player, but the way he carries himself in the locker room is just special,” Morse said of Mahomes’ post-Hunt saga address. “When you bring that kind of confidence and intensity, but calmness at the same time, it’s infectious.”

Still, the respect Mahomes has among the guys in that room grew even more with the way he navigated last week’s rough seas.

“It was definitely a moment,” Morse said. “I thought it was just another peg on his leadership resume that he’s just absolutely blown out of the water this year. Starting from OTAs, just seeing that dude progress as a leader, as a football player, with his confidence — that’s just another testament to it. By the time he did that (Saturday during the team meeting), that was just part of his gig.”