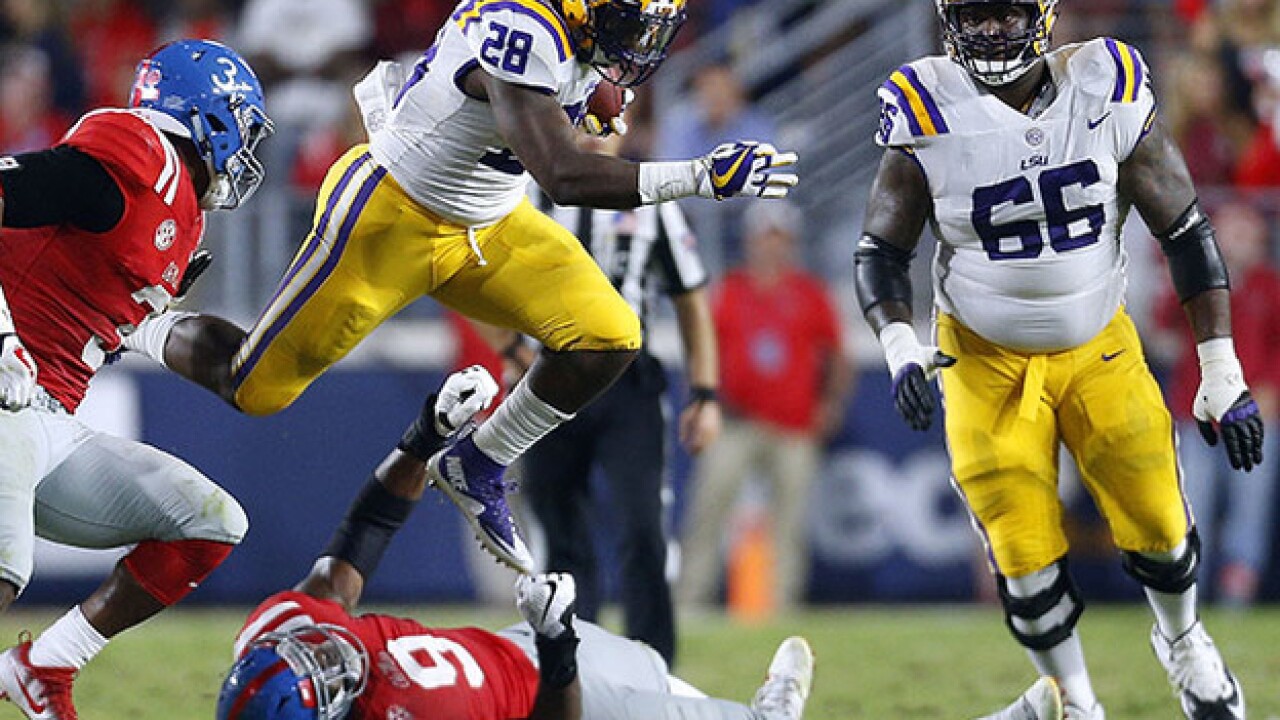 Copyright 2018 Scripps Media, Inc. All rights reserved. This material may not be published, broadcast, rewritten, or redistributed.
Jonathan Bachman
<p>Kansas City Chiefs running back Darrel Williams (28), pictured in this October 2017 file photo with the LSU Tigers, has played well enough the preseason that he's projected to win a roster spot Saturday, Sept. 1, 2018, when the Chiefs trim the roster to 53 players,</p>

KANSAS CITY, Mo. — Roster cut downs are coming Saturday for the Kansas City Chiefs and the rest of the NFL.

By my count, there are 44 players locked into roster spots — guys like Patrick Mahomes, Travis Kelce, Justin Houston and Eric Berry.

There are another eight spots where it’s fair to assume a roster spot with be used for the position — a third quarterback, an eighth offensive lineman, a fifth cornerback. In many cases, those decisions are easy. Keeping Chase Litton ahead of Matt McGloin doesn’t seem like a difficult football choice.

[Editor's note: This story was updated after Thursday's trade with the Cowboys]

If you’re counting, and I know you are, I’ve actually got 55 players projected on the roster. That’s because one is for safety Daniel Sorenson, who seems likely to start the season on injured reserve with a knee injury, and tight end Demetrius Harris, who is suspended for the opener after violating the NFL substance abuse policy.

Based on my projection, the Chiefs will have one toss-up roster spot to fill as the team sees fit.
I don’t think cornerback David Amerson will make the 53-man cut, but he’s a veteran and Chiefs coach Andy Reid values that.

The same could be said of defensive end Frank Zombo. He’s a special teams monster, but the Chiefs have a lot more of than guys than some other years — Terrance Smith, Dorian O’Daniel, etc. — which lessens his value on the roster.

Other veterans would be fine 53rd men for the roster. Bryan Witzmann brings versatility and provides insurance in case Khalil McKenzie, a converted defensive lineman from Tennessee unlikely to slide unclaimed through waivers, isn’t deemed ready for game duty.

But I really think the final spot comes down to running back Darrel Williams and wide receiver Gehrig Dieter, who I give an edge ahead of Jehu Chesson for his value on offense. Both have had bright moments, and it’s still possible Dieter beats out De’Anthony Thomas for a roster spot on his own merit, but I think Williams has been too good to let go.

Thus, he’s my Mr. Irrelevant for the roster projection:

Chad Henne impressed me during the preseason. I thought QB depth might be an issue for the Chiefs, but it seems like Henne is a good fit in Andy Reid’s system. The remaining roster spot comes down to Chase Litton or Matt McGloin, but realistically it isn’t much of a choice. Litton (6-5, 230) is younger, cheaper from a salary cap perspective, and has vastly more upside moving forward. McGloin is 1-6 in his career as a starting quarterback with as many career touchdowns as interceptions (11). With little chance to sneak Litton onto the practice squad, this makes the most sense.

Spencer Ware’s performance against the Chicago Bears demonstrated that he’s healthy and ready to assume a backup role to Kareem Hunt, who is the reigning NFL rushing champ. I actually expect Hunt’s usage to decrease a bit with a quality backup in place. Anthony Sherman remains a cult hero as well as a productive player and special teamer, so his roster spot is safe.

That may leave only one spot for one of the Williamses — Damien, Kerwynn, and Darrel. Strictly based on the preseason, Darrel probably has been the most impressive. He’s a younger version of Damien, but Kerwynn is the most accomplished runner and has the most special teams value. That said, Damien Williams is the best overall running back, especially as a pass-blocker and pass-receiving threat, so I expect he’ll get the nod.

Damien is an underrated receiving threat out of the backfield with at least 20 receptions each season and six career receiving touchdowns. Kerwynn, who is better with the ball in his hands, won’t have trouble finding work and doesn’t have the upside of Darrel. Unable to sneak Darrel onto the practice squad, I think he wins the final toss-up spot on the 53-man roster.

The top three guys are established and Chris Conley was a starter before getting injured last season. Conley remains an important player for depth and on special teams, so his spot is secure. With the remaining depth, priority was given to De’Anthony Thomas ahead of Gehrig Dieter, because of his speed and special teams versatility.

The final spot seems like a battle between Marcus Kemp and Jehu Chesson, but Kemp is more versatile, more polished as a receiver and has performed better in the preseason. Dieter may latch on elsewhere, so it’s unlikely he’ll return to the Chiefs’ practice squad but Pringle — a former Kansas State star — seems like an ideal candidate.

Travis Kelce is one of the NFL’s best tight end and Demetrius Harris remains an intriguing enough athlete that his spot is secure. However, the opening week roster construction is complicated by Harris’ one-game suspension.

That probably means both Jace Amaro and Alex Ellis made the cut for the Sept. 9 game at the Los Angeles Chargers, giving Reid and offensive coordinator Eric Bieniemy more time to evaluate before making a final decision on the third tight end. Look for Blake Mack to get stashed on the practice squad.

The starting core — Eric Fisher, Mitch Morse, Laurent Duvernay-Tardif and Mitchell Schwartz — are the building blocks of the line, while Cam Erving and rookie Khalil McKenzie are going to be Chiefs this season. Parker Ehinger seemed like a lock to me before he was traded to the Dallas Cowboys, which made Andrew Wylie a shoo-in for a spot. That leaves one roster spot available — two if it’s decided McKenzie isn’t ready to contribute but can’t clear waivers to land on the practice squad.

Andrew Wylie got a long look during the preseason and soaked up most of the preseason game reps after Duvernay-Tardif’s injury. He may even wind up starting if Erving is deemed more valuable as a backup center and plug-and-play guy when inevitable injuries happen, because of his versatility. The Ehinger trade probably means Bryan Witzmann nabs a spot, especially as insurance for McKenzie.

Finally, James Murray and Ryan Hunter seem like ideal practice squad candidates, maybe even Ethan Cooper, if none of the players are picked up through the waiver process. Of course, this is also a position for which the Chiefs still may seek help on the waiver wire.

It’s a shame Allen Bailey hasn’t been able to stay healthy in recent years, because he has the potential to dominate when he’s firing on all cylinders. Still, he’s a lock to make the roster along with fellow defensive end Chris Jones and nose tackles Xavier Williams and Derrick Nnadi.

With his experience and familiarity with Bob Sutton’s system, Jarvis Jenkins also feels like a lock, especially given the lack of depth behind him. I almost included Justin Hamilton as a lock, too — and probably should have based on that lack of depth at defensive end.

Defensive tackle Mike Purcell has played well in spurts during the preseason, but roster construction is a numbers game. He’s likely to be the odd man out unless the Chiefs make the unusual decision to keep three nose tackles.

Frank Zombo was among the tougher decisions, but ultimately I have him on the wrong side of the cut line. The Chiefs can save more than $1 million by cutting Zombo, who is a terrific special teams players on a roster that has enough guys to replace that limited (and increasingly devalued by rules changes) skill set.

Kpassagnon and Speaks have made enough progress in the preseason to feel comfortable entering the season without an insurance policy those guys. And Zombo simply isn’t enough of a pass-rushing threat to feel like he must be included on the roster ahead of younger players at other positions.

There really are no surprises here among the locks. Anthony Hitches and Reggie Ragland are starters, who are expected to help shore up a wretched run defense. Ukeme Eligwe and Terrance Smith are solid special teams guys and fine backups.

Rookie Dorian O’Daniel also brings tremendous special teams value and potential additional value as a coverage guy in sub packages. Finally, Ben Niemann has shown some intriguing playmaking ability, enough that I think he’s earned a roster spot. Raymond Davison has shown up enough on tape that he could land on the practice squad.

Kendall Fuller isn’t Marcus Peters, but he’s been stellar in the preseason. Steven Nelson absolutely needs to stay healthy for the Chiefs’ defense to succeed. Tremon Smith needs to gain experience, but he’s got all the physical tools to be a good NFL player. And Orlando Scandrick was added during training camp, because, quite frankly, he was desperately needed.

The Chiefs didn't trade Parker Ehinger for Charvarius Ward just to cut him 40 hours later, so he's a lock to make the squad as well. If I’m the Chiefs and have to keep one more player, it’s Arrion Springs. But that roster spot vanished with the need to keep an eighth offensive lineman after the swap with the Dallas Cowboys. I still believe David Amerson has struggled far too much in the preseason to justify a spot on the roster ahead of Springs, but it's possible Reid and Sutton value his experience.

It wouldn't be the first bad decision they've made regarding the secondary. Meanwhile, one or two of the young corners ought to wind up on the practice squad. I, for one, am hoping Springs is one of them.

Eric Berry and rookie Armani Watts are no-brainers, so is Daniel Sorenson — but I’m projected him to start the season on injured reserve (perhaps designated for return … or not). That still leaves the need for a pair of backups, which almost go to Eric Murray and Leon McQuay by default. Don’t be surprised if safety is a position possibly addressed during the waiver acquisition process.

It was telling that Reid and special teams coordinator Dave Toub didn’t even bring in a challenger to camp for any of the specialist positions. And there was no need. The Chiefs’ collection of specialist are fine.