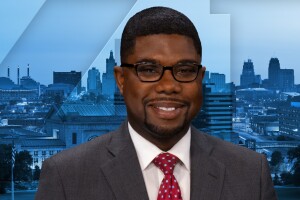 Bryant Maddrick started his career at KSHB in December 2019.
He is a graduate of Temple University. Bryant came to KC after working in Columbus, Ohio at WSYX. Prior to that, he worked at WHP in Harrisburg, Pennsylvania, WNWO in Toledo, Ohio and KNDU in Kennewick, Washington.

Since he was a child, Bryant’s dream was to be a reporter. He is proud he could turn that dream into a reality. He loves when his work can give a voice to those who are often ignored.
Now that Bryant is in KC, he loves exploring the rich food and music scene. He’s a fan of jazz, R&B, and Jamaican. He would gladly accept any recommendations from Kansas Citians.

If he’s not checking the news on KSHB, Bryant likes to read newspapers and also gets information from NPR.