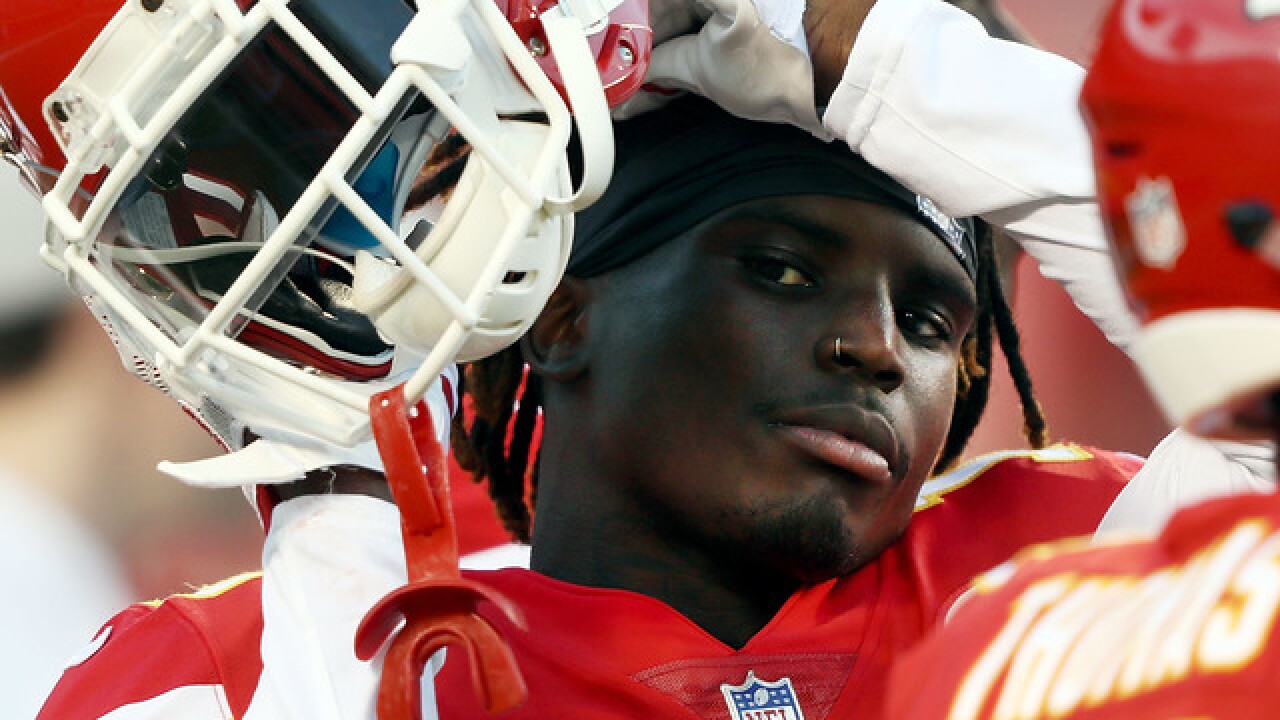 KANSAS CITY, Mo. — Tyreek Hill will not face additional discipline from the NFL under its Personal Conduct Policy.

In a release Friday morning, the league said they were unable to determine if Hill had violated the policy and as such, cleared Hill to rejoin the team and training camp, which is set to start next week.

"Based on the evidence presently available, the NFL cannot conclude that Mr. Hill violated the Personal Conduct Policy," the league said in a statement. "Accordingly, he may attend Kansas City's training camp and participate in all club activities. He has been and will continue to be subject to conditions set forth by the District Court, Commissioner Goodell, and the Chiefs, which include clinical evaluation and therapeutic intervention."

The Chiefs also released a statement after being notified of the league's decision:

"Based on the information provided to us by the league, we have decided it is appropriate for Tyreek to return to the team at the start of training camp. The club fully supports the conditions for return laid out by the league and will continue to monitor any new developments in the case. We are glad to welcome Tyreek back to the team and look forward to the start of training camp next week."

On Twitter, Hill released a statement, saying the last few months have been difficult for him as a father.

"The false allegations originally reported in March were highly publicized and involved the care of my son. I am grateful for so many things and grateful for so many people who have supported me during this challenging time," Hill wrote. "I fully respect and accept the NFL's decision."

Hill, an All-Pro wide receiver and return specialist, and the Chiefs effectively suspended from all team activities April 25 when snippets of a conversation with his former fiancee, Crystal Espinal, were leaked.

"We decided that at this time and for the foreseeable future, Tyreek Hill will not partake in any team activities," Chiefs general manager Brett Veach said.

The Chiefs have since clarified that it was a mutual decision and not technically a suspension, though it had the same practical effect during offseason workouts.

The couple can be heard discussing an injury the couple’s 3-year-old son suffered on the audio, which Espinal allegedly recorded while walking through a Dubai airport.

Espinal can be heard saying the child blamed Hill, who also curses at his then-fiancee.

The son’s broken arm became the subject of an Overland Park police investigation, the results of which were turned over to the Johnson County District Attorney’s Office.

Police visited Hill’s home twice in March as part of the investigation.

One day before a local TV station aired portions of Espinal’s secret recording, which happened on the first day of the NFL Draft, Johnson County District Attorney Steve Howe said he believed a crime had occurred at a press conference.

However, Howe said that his office couldn’t pursue charges due to a lack of evidence about who was guilty.

No charges are expected to be filed in the case.

That didn’t stop the Kansas Department for Children and Families from launching a child-welfare investigation and temporarily removing the 3-year-old from the custody of Hill and Espinal.

A DCF spokesperson confirmed to 41 Action News that its investigation remains ongoing.

Sources confirmed to 41 Action News that Hill’s visitation rights with the child have been restored after he was initially removed from parental custody early in the DCF investigation.

Hill has denied injuring his son through his attorneys and met with representatives from the NFL in late June, according to reports.

“The Drive” on KCSP-610 AM, also known as 610 Sports Radio, aired an unedited version of the bombshell recording, providing new context for the couple’s conversation.

Yahoo Sports reported that the Chiefs expected a ruling from the NFL about any possible suspension for Hill before reporting to training camp.

The NFL also left the door open to revisit the situation if new information is made public.

"If further information becomes available through law enforcement, the pending court proceeding, or other sources, we will promptly consider it and take all appropriate steps at that time," the NFL said.

At some point during the saga, the couple apparently called off their engagement.

In early July, Espinal gave birth to twins and filed a lawsuit in Johnson County District Court — asking the state to determine the paternity of the children, grant her sole custody and order Hill to pay child support.

NFL Commissioner Roger Goodell has wide latitude to levy punishment under the collectively bargained Personal Conduct Policy, so a suspension certainly was possible even in the absence of charges.

Hill was a controversial pick when the Chiefs selected him in the fifth round of the 2016 NFL Draft out of West Alabama.

After starting his college career with at Garden City, Kansas, Community College, Hill was a budding star at Oklahoma State before his December 2014 arrest for alleged domestic violence in Stillwater, Oklahoma.

Hill pleaded guilty in that case, though his record was expunged last August after he satisfied all the requirements of the plea deal.

On the full recording, Hill and Espinal discuss the 2014 arrest and bicker over details about the incident. Espinal was pregnant at the time with the couple’s oldest child.

He’s only one of several Chiefs with domestic violence incidents or accusations in his past.

Last December, the Chiefs cut running back Kareem Hunt after TMZ released video of him shoving and kicking a woman at a Cleveland hotel.

He was suspended eight games by the NFL and signed with the Cleveland Browns during the offseason.

Shortly before the 2019 NFL Draft, the Chiefs also traded for defensive end Frank Clark, who was accused of domestic violence in college at the University of Michigan.

Jovan Belcher shot his girlfriend then committed suicide in the parking lot at the Chiefs’ practice facility in 2012.