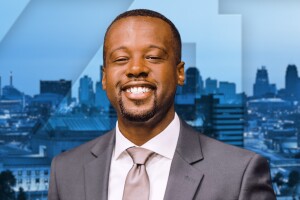 Aaron is originally from Stone Mountain, Georgia, but joined the 41 Action News team in April 2020 by way of Myrtle Beach, South Carolina where he worked as a digital Journalist for WMBF News in Myrtle Beach, reporting news, sports and working as a digital content producer on weekends.

He graduated from the prestigious University of Missouri School of Journalism with an emphasis in Sports Broadcast TV/Radio in 2018, and is a proud member of the ‘Mizzou Mafia’. Aaron is glad to return closer to his college stomping grounds.

While in school he worked as a reporter at KOMU 8, the NBC affiliate in Columbia, Missouri. Aaron is also a proud member of the National Association of Black Journalists and considers himself an ‘NABJ baby’, growing up around the organization and earning a national scholarship in 2014.

Aaron is a die-hard Atlanta sports fan (Braves, Falcons, Hawks) still licking his wounds from Superbowl LI. Going to games with his mom and dad as a child is what he believes helped fuel his passion for sports and storytelling.

Aaron is new to the Kansas City area and is always looking to try a new restaurant. So far, he is loving the KC culture and, of course, the BBQ.
His all-time favorite albums are: Late Registration, Kanye West; So Much Fun, Young Thug; Care for me, Saba; Awaken My Love, Childish Gambino.

If you ever see him around don't be afraid to say 'Hello!' Shoot him an email here: aaron.ladd@kshb.com
Or find him on social media here. Twitter -or- Facebook