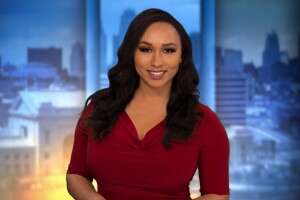 Daisha Jones joined the 41 Action News team as a traffic anchor in January of 2020. Previously, she was a morning reporter and a weekend/morning anchor in New Bern, North Carolina.
She’s an Arizona native and graduated from the University of Nevada, Reno with dual degrees in broadcast journalism and communications studies. She also played Division 1 soccer!
Daisha got her first TV job in Reno as producer at KRNV-KRXI News 4 and Fox 11.

The thing she loves most about working in news is helping her community and bringing viewers accurate information as well as having a positive impact on their lives.

When she’s not at the station, Daisha likes to explore the surrounding areas, play with her dog, play soccer and try new restaurants. She believes KC has great food, atmosphere, and tons of things to do for fun. Her favorite movie of all time is Pretty Woman, if she’s watching TV, she loves a good murder mystery (like ‘You’ on Netflix), and her favorite book is Eat, Pray, Love.

If you ever see Daisha out in public don’t be afraid to say hello as she loves to meet new people. Catch her on Twitter, Facebook, and Instagram.