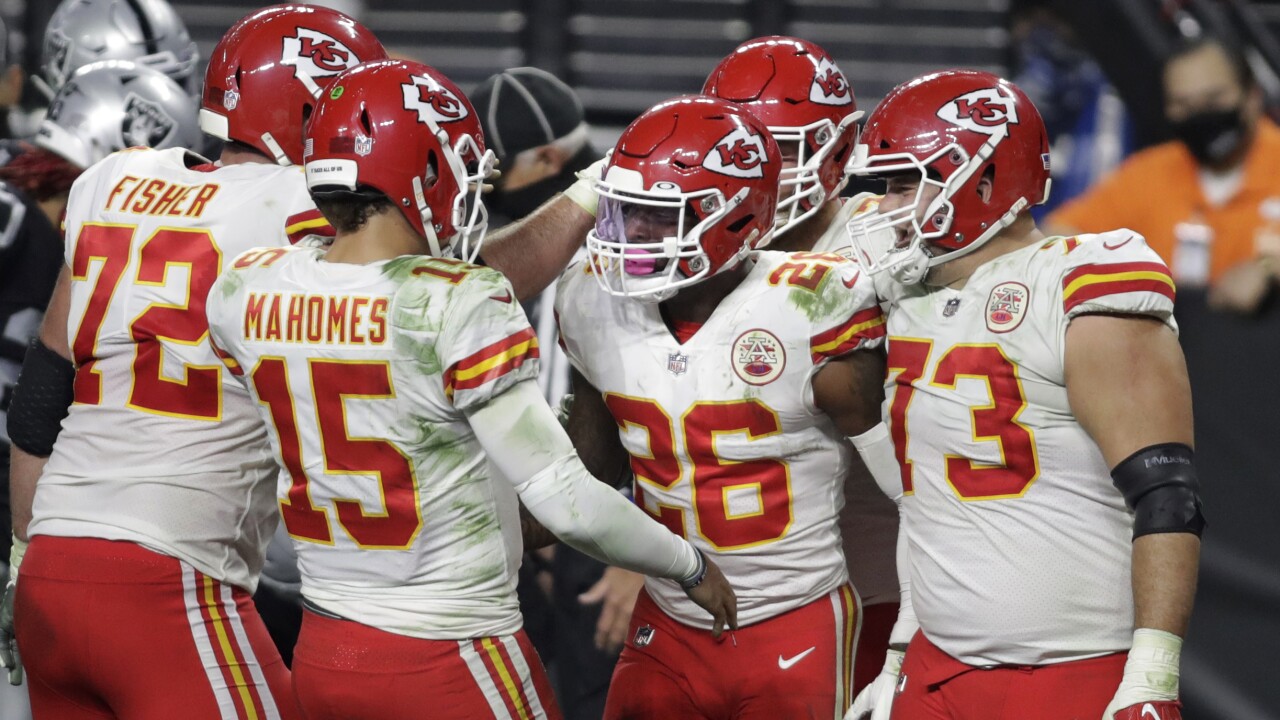 (Copyright 2020 The Associated Press. All rights reserved. This material may not be published, broadcast, rewritten or redistributed.)
Isaac Brekken/AP
Kansas City Chiefs celebrate after running back Le'Veon Bell (26) scored a touchdown against the Las Vegas Raiders during the second half of an NFL football game, Sunday, Nov. 22, 2020, in Las Vegas. 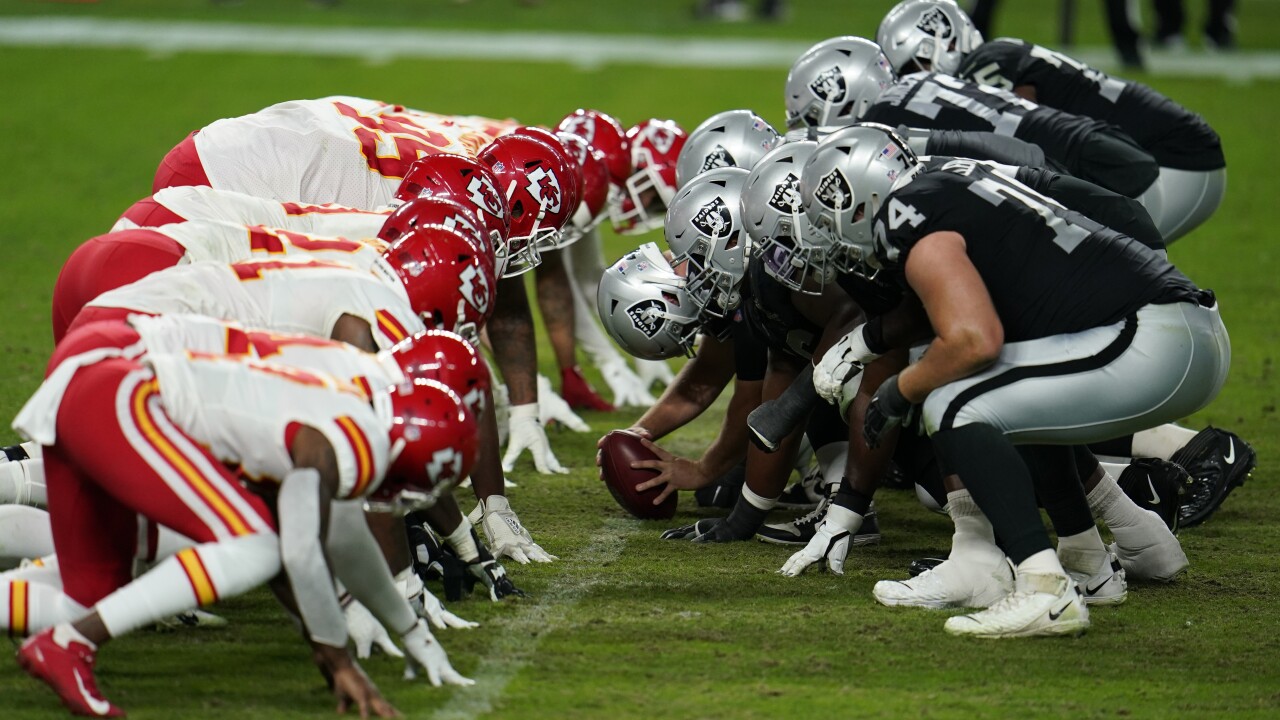 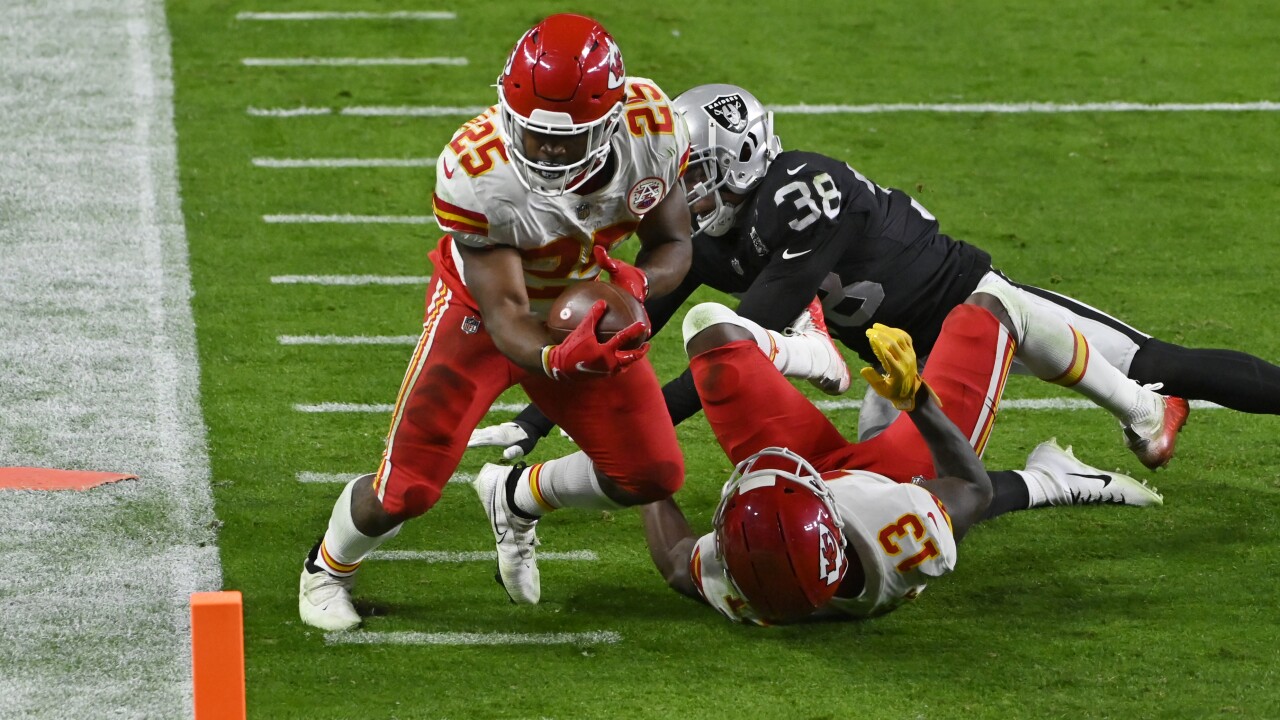 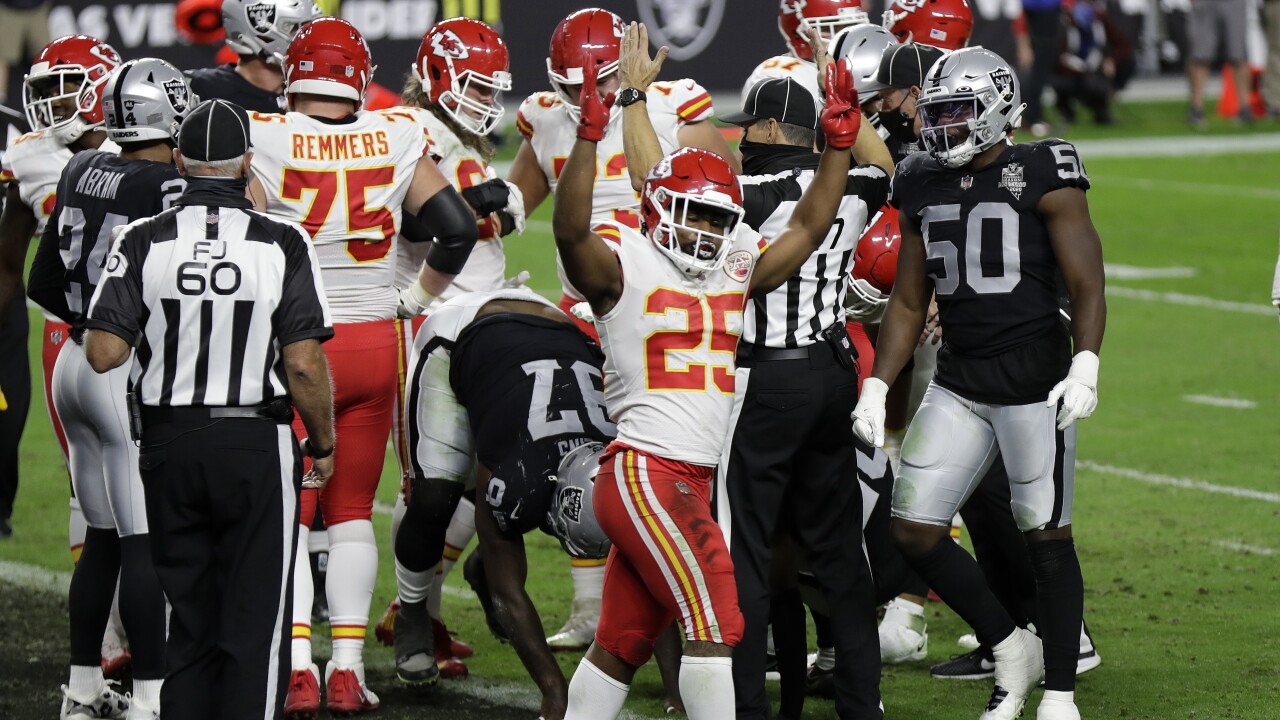 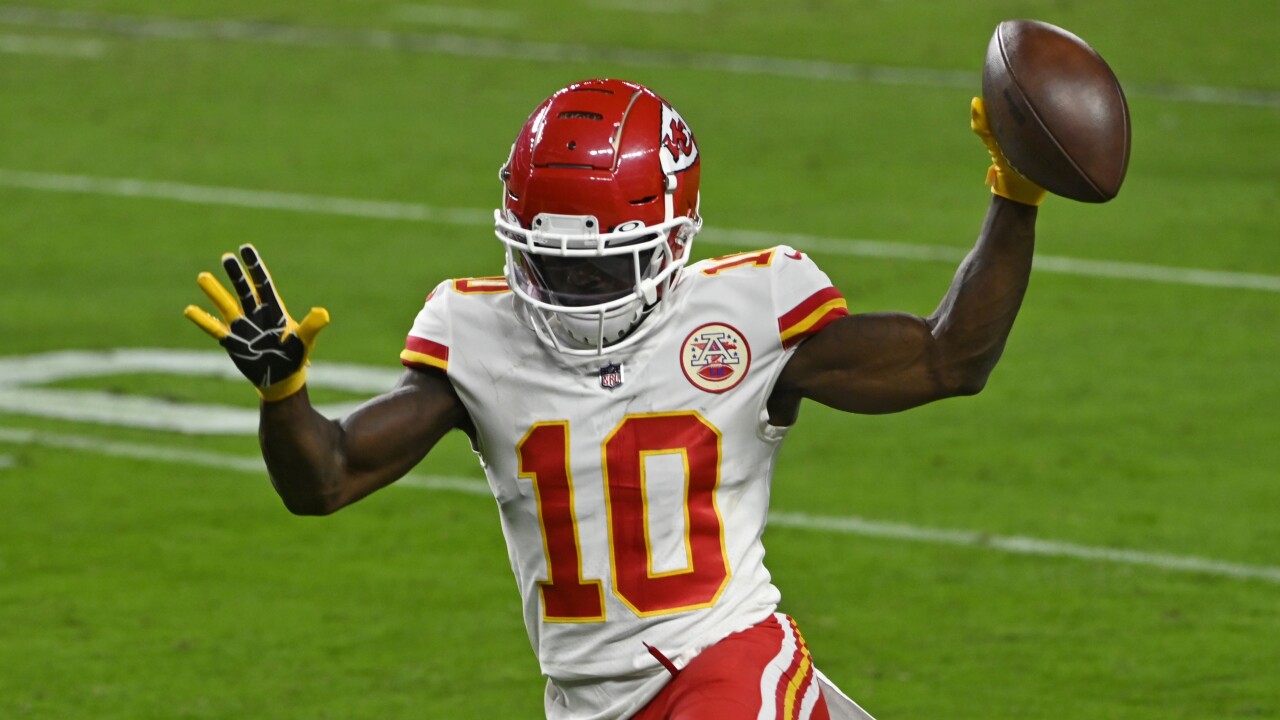 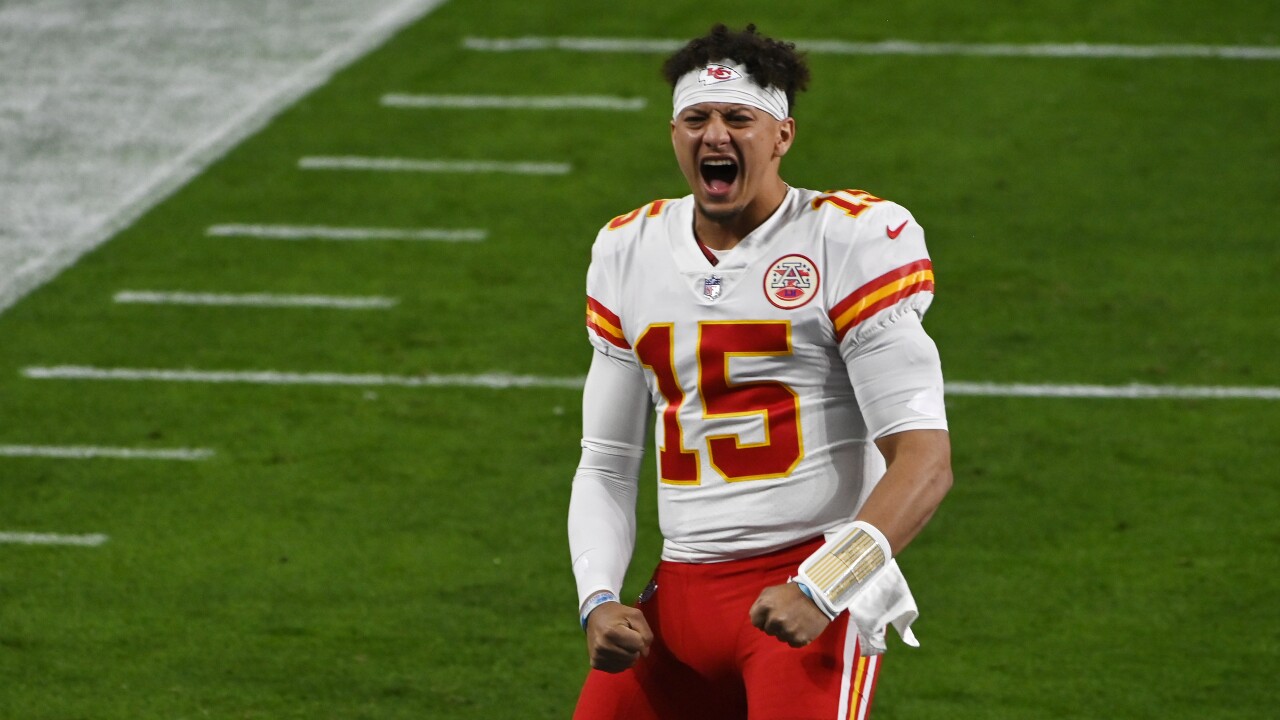 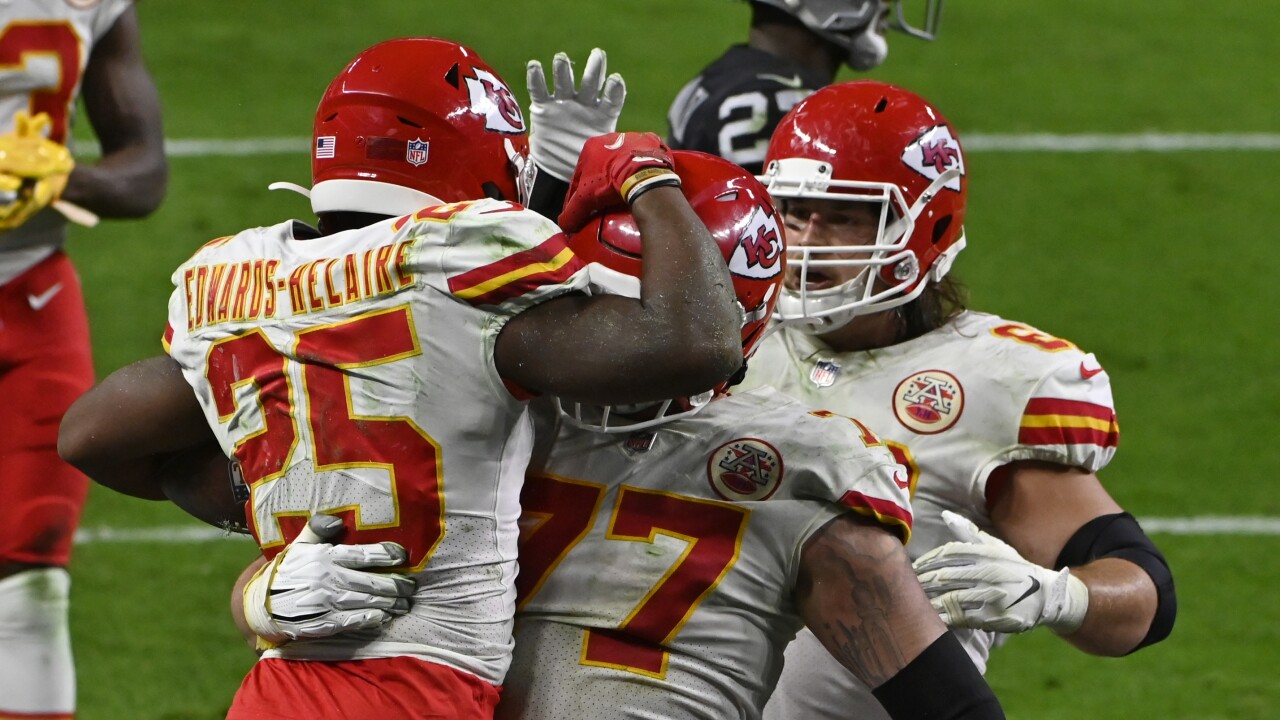 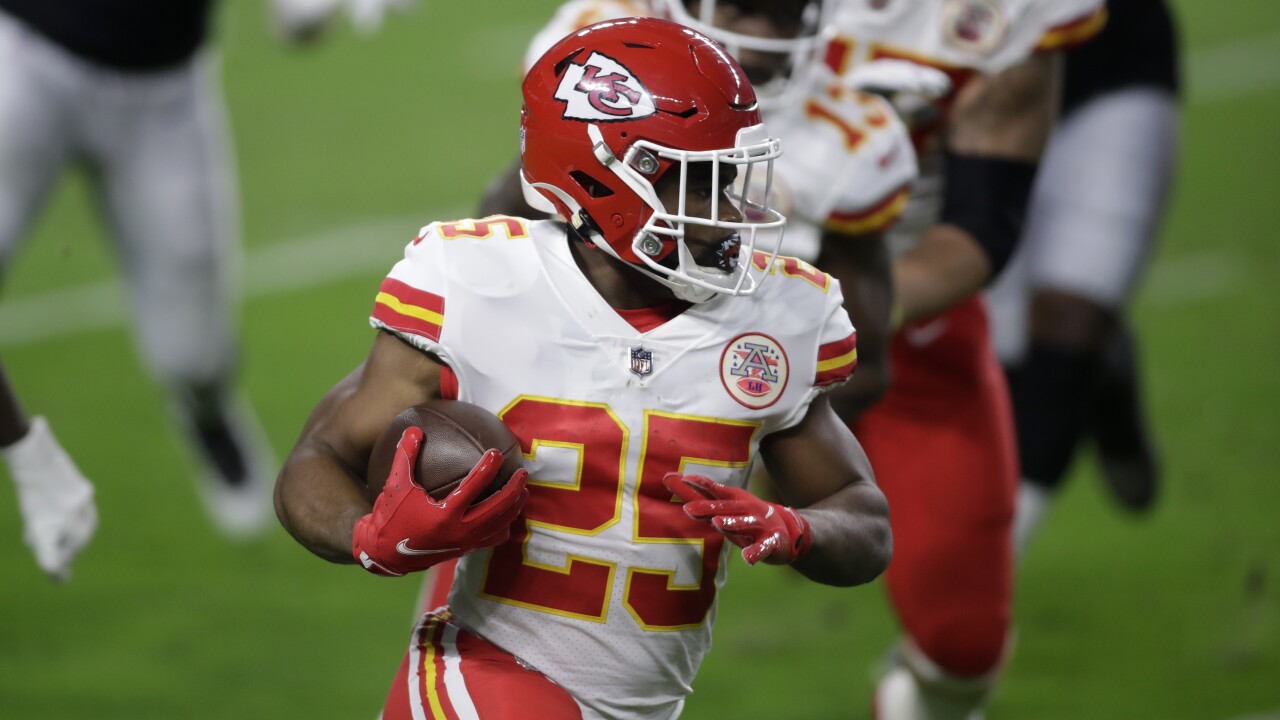 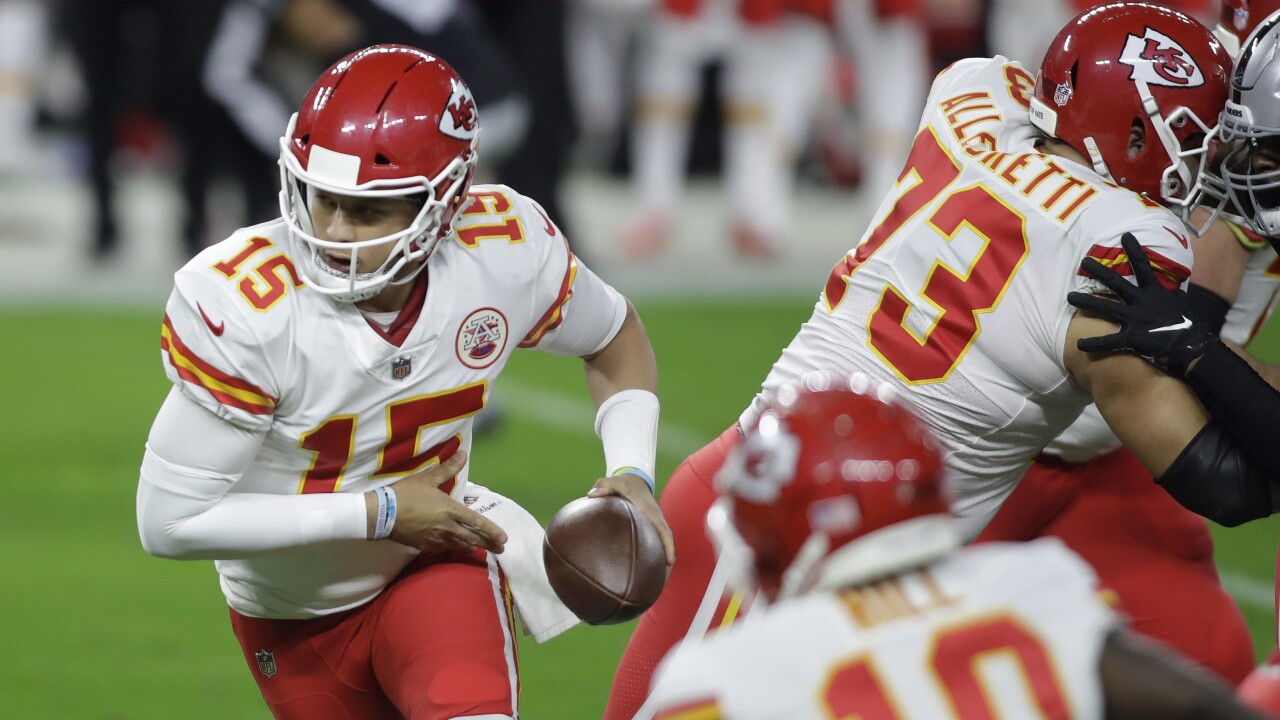 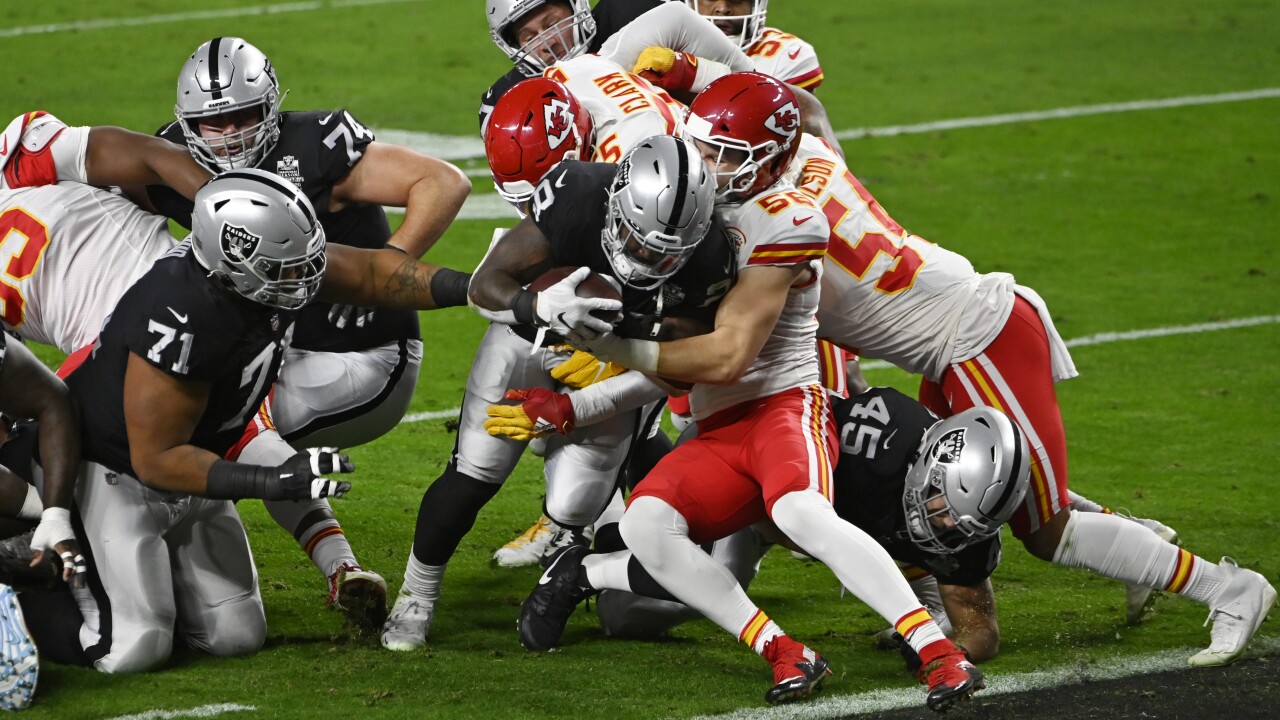 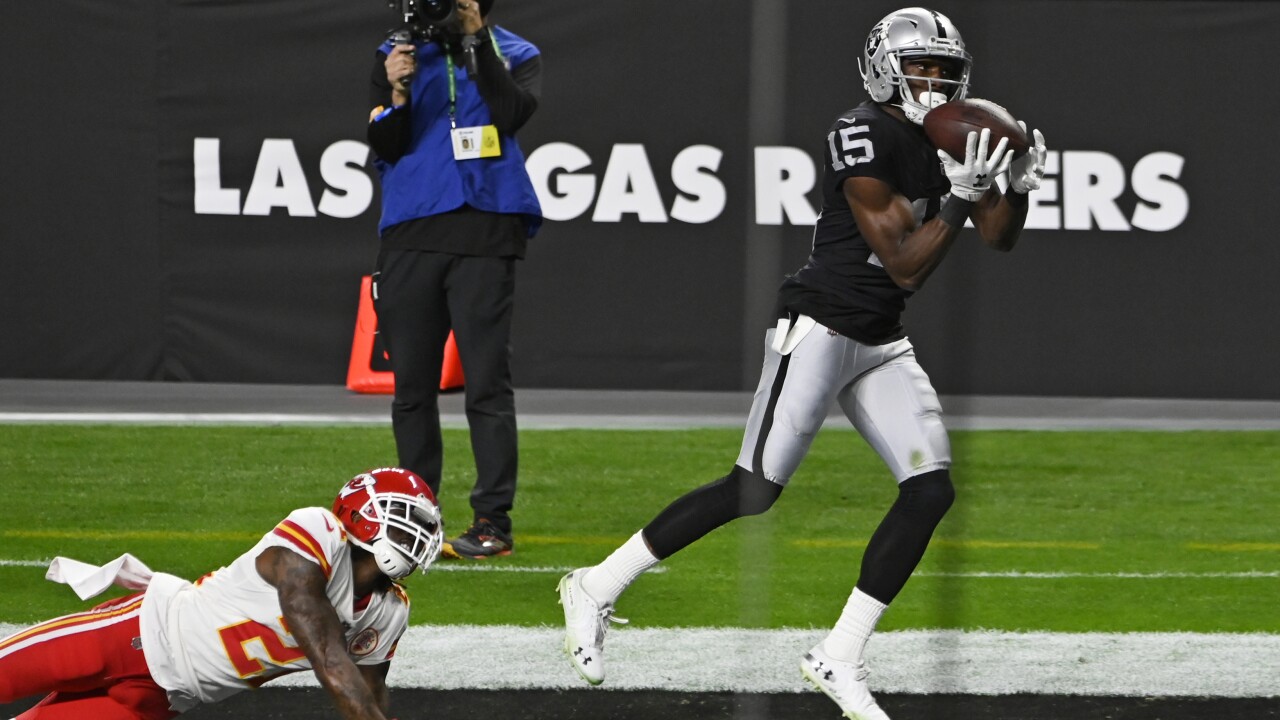 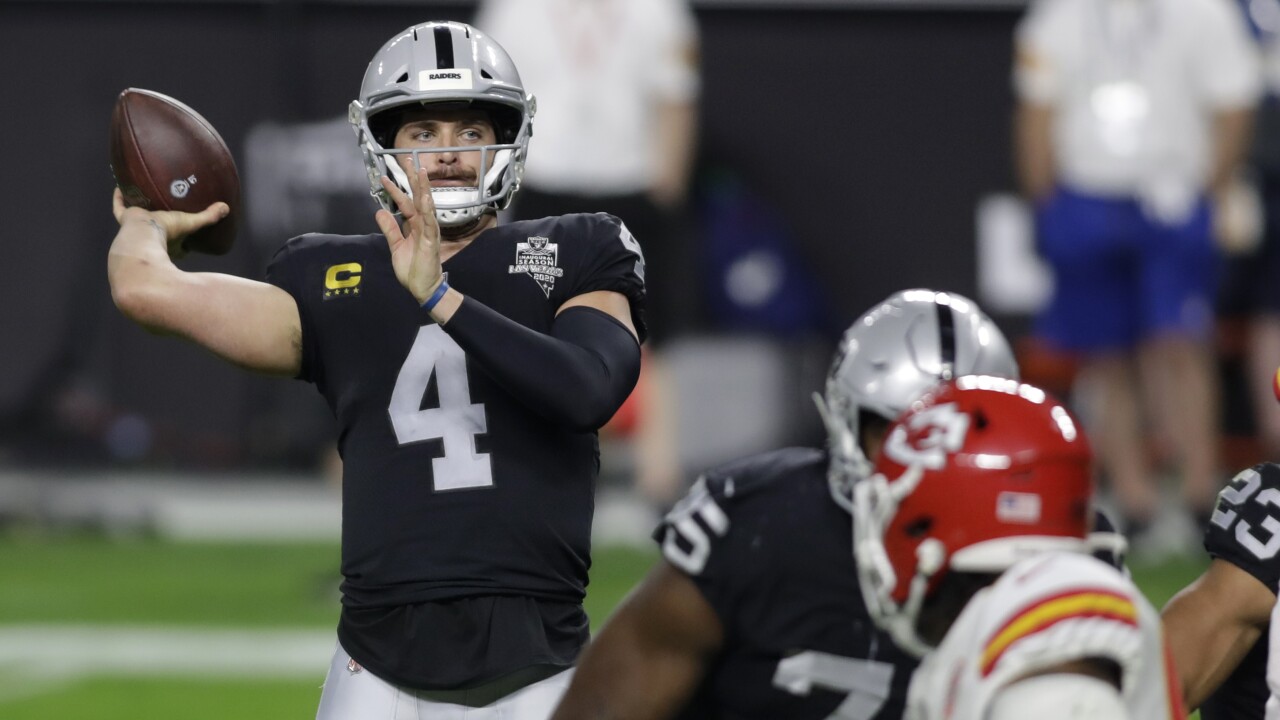 10:25 p.m. | Derek Carr throws a jump ball, which Daniel Sorenson comes down with and the Chiefs' first trip to Las Vegas is a winner.

10:17 p.m. | Despite an uncalled false start and with the Chiefs unable to generate pressure on play-action, Jason Witten beats Tanoh Kpassagnon in coverage for the go-ahead touchdown.

The Raiders lead 31-28 against the Chiefs with 1:43 remaining, but Kansas City has time and a timeout remaining to try and win the game or force overtime.

9:56 p.m. | With his first touchdown for Kansas City, Le'Veon Bell puts the Chiefs in front 28-21 with 5:54 remaining against the Raiders at Allegiant Stadium in Las Vegas.

That is the first touchdown in a Chiefs uniform for RB Le'Veon Bell and his 1st rushing TD of 2020. He now owns 39 career rushing TDs.

9:54 p.m. | With a Hall of Fame toe drag for a 19-yard gain on second-and-8, Travis Kelce earned another first down for the Chiefs.

With that reception, TE Travis Kelce (7,324) moves past WR Otis Taylor (7,306) for the 2nd most receiving yards in franchise history. He trails only PFHOF TE Tony Gonzalez's team record of 10,940 yards.

Patrick Mahomes gets another chance to put Kansas City back in front, trailing 24-21 with 11:33 remaining.

9:37 p.m. | Up 24-21, the Raiders' defense forces a punt and now the pressure is on the Chiefs' defense not to let another one get away in the division.

9:29 p.m. | On the first play of the fourth quarter, Derek Carr connects with Darren Waller on a 3-yard touchdown and the Raiders retake the lead 24-21 with 14:54 remaining on Sunday Night Football.

A wide open Waller gives the @Raiders the lead! #RaiderNation

9:27 p.m. | After three quarters, the Chiefs lead 21-17 at Las Vegas, but the Raiders have a second-and-goal at the 3-yard line as the fourth quarter begins.

Kansas City went 16 plays, 93 yards and devoured 8 minutes and 37 seconds with the opening drive of the third quarter.

Clyde Edwards-Helaire's second touchdown, a 14-yard scamper to go with the 3-yard touchdown he scored in the first half, have the Chiefs up 21-17.

The Raiders lose a timeout, which could prove critical in a close game.

8:47 p.m. | That is only Mahomes' second interception of the season and both came against the Raiders.

The Chiefs were in position to be no worse than tied at halftime, but instead trail 17-14 at the break.

It's the second straight week and third time this season that Kansas City has trailed at halftime.

The good news? The Chiefs are 2-0 in those previous games, rallying to beat the Los Angeles Chargers in overtime in Week 2 and overtaking Carolina last week after intermission.

8:32 p.m. | The Raiders only used 43 seconds on a drive that ends with their first punt of the game.

Patrick Mahomes and the Chiefs' offense have 1:24 to do something about a 17-14 deficit.

8:23 p.m. | Penalties undo the Chiefs on that drive and the first punt of the game comes with 2:07 left before halftime.

The Raiders will try to add to their lead entering the break.

8:18 p.m. | Daniel Carlson put the Raiders back in front 17014 with a 35-yard field goal, but avoiding a touchdown feels like a defensive stop the way the game has gone.

The Chiefs have 4:36 left in the second quarter to answer and will get the ball to start the second half, so this is a key possession.

8:05 p.m. | Defenseless in the desert! We've had four drives and four touchdowns on Sunday Night Football.

The Chiefs' latest counter-punch is a 3-yard touchdown run from rookie Clyde Edwards-Helaire.

With Harrison Butker's extra point, Kansas City and Las Vegas are tied at 14-14.

7:52 p.m. | For the third straight quarter, the Chiefs' defense doesn't seem to have an answer for stopping the Raiders.

Derek Carr closes the first quarter with a cheeky 17-yard touchdown throw to Nelson Agholor in the corner of the end zone and Las Vegas is up 14-7.

The Chiefs and Raiders are tied at 7-7 with 4:01 left in the first quarter.

It's the second time this season Hill has scored a touchdown in four straight games.

WR Tyreek Hill has at least one TD reception in 4 straight games, the 2nd time this season that Hill's tallied a TD in four straight games (Weeks 1-4).

7:30 p.m. | Derek Carr completed his only two passes for 55 yards and Josh Jacobs averaged 5.0 yards per carry, including a 2-yard touchdown, on the opening drive from Allegiant Stadium.

6:55 p.m. | 41 Action News Sports Director Mick Shaffer confirms that Patrick Mahomes is warming up and expected to start. Not that there was a doubt.

Patrick Mahomes is one of the ones throwing the ball. #journalism pic.twitter.com/MYb9nrvoJL

Also, here's a look at the pregame fuel, though it ain't no Kansas City BBQ, for Shaffer, who collected another regional Emmy Award last night.

Getting taken care of in this press box. It’s like they think I’m from The Star or something. @mellinger @vgregorian @BlairKerkhoff pic.twitter.com/fcBerJ9SJz

6:48 p.m. | Fans aren't allowed inside Allegiant Stadium for Las Vegas Raiders games during the team's inaugural season in the desert, but 41 Action News Sports Director Mick Shaffer was allowed in.

Perhaps Chiefs Chairman and CEO Clark Hunt, who made the trip to Las Vegas, is getting some new ideas on how to spruce up Arrowhead Stadium. Or maybe he just wants to be there for Kansas City's inaugural win at Arrowhead West.

Clark Hunt pacing the field. I talked with him 1-on-1 exclusively last week. In fact, I asked him to talk to literally no one else: family, employees, nobody. pic.twitter.com/EfrFD5qFeA

Hear from Hunt in an exclusive one-on-on with Mick Shaffer:

6:19 p.m. | The only blemish for the Chiefs in the last year is that Week 5 loss against Las Vegas. Here's what "4th & 1" podcast analyst Nick Jacobs says the Chiefs must do to avenge that loss and knock off the Raiders.

Kansas City native Maliek Collins, a defensive tackle for Las Vegas, is among seven defenders who came off the reserve/COVID-19 list Saturday and will suit up for Sunday Night Football in one hour.

Here are the Raiders’ inactives for tonight’s game:

5:56 p.m. | As expected, Chiefs wide receive Sammy Watkins is among those listed as inactive for tonight's game against the Las Vegas Raiders.

But cornerback L'Jarius Sneed will be active for the first time since suffering a broken collarbone in a Week 3 win at Baltimore. Defensive end Alex Okafor also is back from a lengthy absence with a strained hamstring.

Here are the Chiefs’ inactives for tonight’s game against the Raiders:

ORIGINAL STORY | Much to Jon Gruden’s chagrin, word that he ordered the Raiders team bus to do a victory lap around Arrowhead Stadium leaked and became a major storyline ahead of Sunday’s showdown with the AFC West-leading and reigning Super Bowl champion Kansas City Chiefs at Allegiant Stadium in Las Vegas.

As the “4th & 1” podcast crew explains, there are reasons to question Gruden’s tactics — including his relationship with Andy Reid and the importance of winning an October game in the NFL — but it’s a beautiful thing for restoring some of the rivalry’s animosity.

Gruden hates the Chiefs, who had so dominated the series with the Raiders during Reid’s tenure that the rivalry lost its edge.

But these teams ain’t friends no more if you ask Chiefs defensive lineman Chris Jones.

That’s back as Kansas City prepares to try and avenge its only loss of the season — a 40-32 loss Oct. 11 — on Sunday Night Football, a game that will air on 41 Action News.

Be sure to tune in for a special one-hour preview of the Chiefs-Raiders game at 5 p.m., which features exclusive one-on-ones plus stories and analysis to get Chiefs Kingdom pumped to pummel Las Vegas.

Cornerback Charvarius Ward, whose struggles against Las Vegas led to several big plays, declared himself to be out of a self-described slump.

On the injury and illness front, there’s good news for Kansas City, which should get wide receiver Sammy Watkins back for the first time since exiting the previous Raiders game with a hamstring strain.

Rookie cornerback L’Jarius Sneed, who left a Week 3 win at Baltimore with a broken collarbone, should return for the Raiders game. He had an interception in his first two NFL games.

The news is less rosy for the Raiders, who have had more trouble than any other NFL team with COVID-19 outbreaks.

The Las Vegas defense almost certainly will be shorthanded against Kansas City, but the Chiefs have their own COVID-19 issues.

Wide receiver Mecole Hardman Jr. had not returned from the reserve-COVID-19 list as of Friday, while three offensive linemen, including both starting tackles, also landed on the list.

Left tackle Eric Fisher and right tackle Mitchell Schwartz returned from the reserve/COVID-19 list late in the week, but only Fisher will be available Sunday with Schwartz still recovering from a back injury.

There won’t be any fans at Allegiant Stadium on Sunday, but Chiefs Chairman and CEO Clark Hunt predicts the road trip will become a popular one in years to come for Chiefs Kingdom.

Despite new restrictions related to COVID-19, the Chiefs and Sporting Kansas City will continue to be allowed to have fans at games at reduced capacity.

Off the field, Hunt and the Chiefs made news Tuesday, signing Reid and GM Brett Veach to extensions.

His wife, Tavia Hunt, also led a special push to raise money for Harvesters Community Food Network and the NFL announced the team’s Fan of the Year.

For more details on the Chiefs’ status at midseason, and what it will take to repeat as Super Bowl champions, don’t miss the “4th & 1” podcast’s bye week edition.